Too thin and dry.


To break this angry heart of flesh and bone.

So stitch the present with the past


And stay my heart.


September. It’s after midnight and a message pops up on my screen:  “So excited to be discussing cannibalism with you all! We have a whole body and we can serve up any piece we want!”

No, it’s not a satanistic chat room I have accidentally dropped into. It’s my first email from Bryan Fuller since Hannibal got renewed for Season 3.


“ONE LEG, TWO ARMS” exclaims the next email. (Bryan often speaks in capslock) “Three different dishes and any and all food anecdotes welcome!”

“to whom?...alone?” is the response cc’d immediately from Jose Andres – disjointed as the limbs we are considering. It’s wee hours at his fabled ThinkFoodGroup in Washington DC – or is he emailing from a chifa in Peru?

Bryan replies, “ Like Gideon has stumbled into a strange fairy tale and Hannibal is the Wicked Witch. How about Candied Thigh?” comes Bryan’s cheerful reply. He and Steve Lightfoot are emailing from the Writer’s Room where ideas are flying like “my pretties” over Oz.

I put my food stylist hat on and think...of Saurbrauten, pork braised with gingersnap spices. And Ground Hansel and Gretel Meat Pie. Lame, I know. But a flash of inspiration: what would work - braised pork belly, a yummy rich northern Chinese dish and so I email a photo of Candied Pork Belly with Sugar Cane to Bryan and Jose.

In a 5am email, a rush of words from Jose: “…follow me to Wadsworth Athenea...Guiseppe Archimboldo painting…reproduce his head in vegetables…big table, beautiful shot. Little prince in the Sahara…why doesn’t Hannibal bury him in the bathtub with music like the walkiries…Fingers in a sweet sauce…Hannibal serves Gideon with chopsticks…bones spit into a copper Tibetan bowl that rings out … like the last sound the body makes in death…”

A smile breaks across my face and I plunge into the rushing river of madness that is Hannibal.


If the first episode is titled Antipasto we must be in Italy. Florence to be exact. Home to Il Mostro, the Museum of Atrocious Torture Instruments and now, the Bride of Hannibal.

Well, some people are in Florence.

Evidently, there are people in Italy who can cook. So they don’t feel the need to bring me along from Toronto while they are filming in Florence. Che cavolo!

But of course, we are shooting much of series in Toronto. So this, my third season as Hannibal’s food stylist, gets off to a flying start. There is a lot of food in the first four episodes and half-way into reading the scripts I know I am going to need a flow chart.

Slow-roasted leg of Gideon: Bryan wants to see the w-h-o-l-e leg. He gleefully imagines the scene: 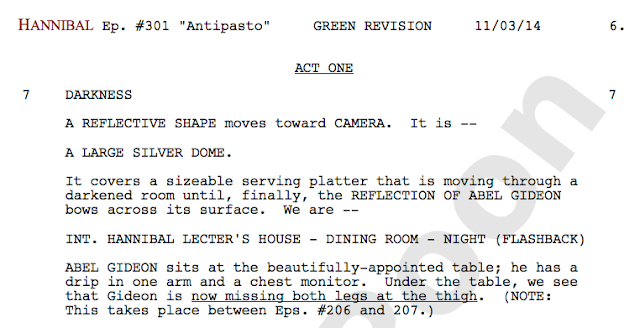 So I do up a sketch, make up a shopping list and lay in an order for 18 double loins of pork which I jam into my fridge which is already filled to the max. Then the careful work of trimming, shaping, tying, wrapping, inserting bones and roasting.


Thanks to my pal at Powders for Texture, who has given me a couple of packages of transglutaminase (charmingly called meat glue by the food industry), the legs take shape nicely and I arrive at the studio with two whole legs and 5 extra thighs I can patch on for resets.

I’ve made candied apples and sugared fruit and garnished them with leaves made out of ground up gingerbread boys (myah ha ha) to create the Hansel-and-Gretel scent of a candy-cane gingerbread house. A scary salad of freakish looking vegetables (inspired by Oakley at Frieda’s who’s motto “Eat one fruit a day that scares you” are words to live by.)

This classic poem by Martial became perhaps more famous when an English schoolboy parodied it to taunt his professor:

..and neither does Hannibal...altho he seems to like his liver. So we are cooking up a lot for this scene. Bags and bags of liver to find the perfect matching pieces for the first eating scene of Season 3.


It's a Snails Snails World

Then it’s on to the snail dish – first of many.

Jose had given so many wonderful ideas but we needed a recipe for arm. I had sent off a few thoughts –Peking Duck Arm that would require plenty of insult in the preparation: inflating, glazing with hot honey, drying, and roasting…or Arm Ham which would require salting and hanging. But these elicited no response – I could almost hear my emails fall short with a dull “thud” in Bryan’s inbox.

Then I remembered a detail about I heard about snails when I was loitering in an aquarium shop: some snails are meat-eaters. Eureka!

Hannibal could grind up G’s arm and feed it to the snails then feed the snails back to G. The food chain that eats itself like an Escher drawing! I’m scaring myself, that idea is so dastardly.

I mention the ancient cochlear gardens where, since Roman times, various snail species have been raised in gardens with fruits and herbs that enhance their particular flavour. And that snails love to eat in groups so large that you can hear the rasping as they "chew" their way through lunch. I also throw in a factoid about the purple slime that some snails excrete when they are irritated. It makes a strong dye that gets deeper as it ages. Purple for the rich - since it takes a lot of angry snails to make enough dye to colour a 3-piece suit.

I was called in to do the food displays for the interiors of the Vera Dal shop and spent many hours decking the halls with stinky cheese and furry feathered game. Were you worried when you saw the drool of blood dripping from the bunny's nose in Vera Dal? That's what happens when game is hung. Because you hang them upside down, the blood naturally pools in the head and sadly drips from the nose. Which is why the head is often wrapped in paper. Also so you don't feel like mr bunny is staring at you accusingly as you lay him out for dinner.

That’s also why I can’t give you any recipes.

It would make them all quite cross.

Last word goes to all who are made into a broken heart:

Goin' to the chapel and we're gonna get harried

OH, and yes...
You might wonder why there aren't any of my food sketches in this post. They're top secret stuff now until the cookbook comes out. So here's a sketch I did for Bryan Fuller's issue of Fangoria but the story didn't run, ergo neither my sketch. It's Dracula's dinner.