Shards can hold no poison.

Time to no time 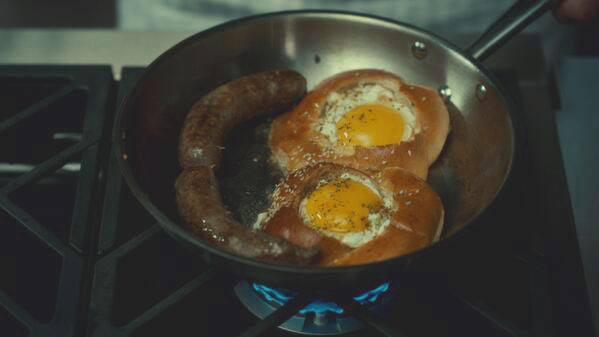 Pulled from broadcast, Episode “Oeuf” was viewable only on line. In this episode, Hannibal made psilocybin tea, blood sausages and gorgeous wine-soaked pears but his High Life Eggs breakfast was the most requested recipe of the season. Jose Andre's people sent me these pages from El Practicon, a 19th century book on food written by Angel Muro, and I have modified it into a recipe for you below, translated by my foodie pal Leo and demo'd by my Spanish doctor. 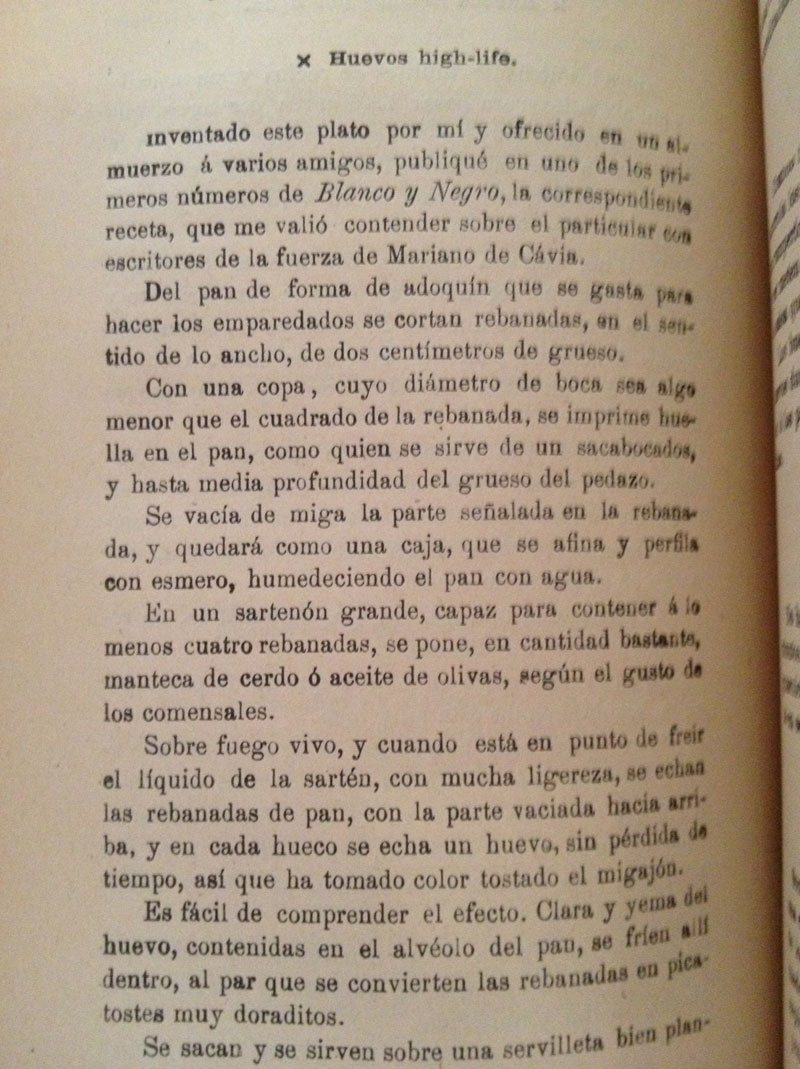 Cooking is one thing...

Food styling is another thing altogether. There's no recipe for that.

You think this episode was deadly for the Kid Killers? Try getting through my day...it's the second day of food scenes and the last day of shooting for this episode.  Four of the 5 scenes on today's call sheet have food. Plus one food insert that was scheduled at the last minute.

OK who stole my sides? These are the miniaturized scripts printed on half-sheets that some of us carry around on set. We mean to read them during the lulls so we can get a fresh reminder of the scenes we are about to shoot. But now, of course, most everyone uses their smart phone. I cling to the old paper ways – I like to circle things and make flow charts and diagrams so a print-out works best for me. 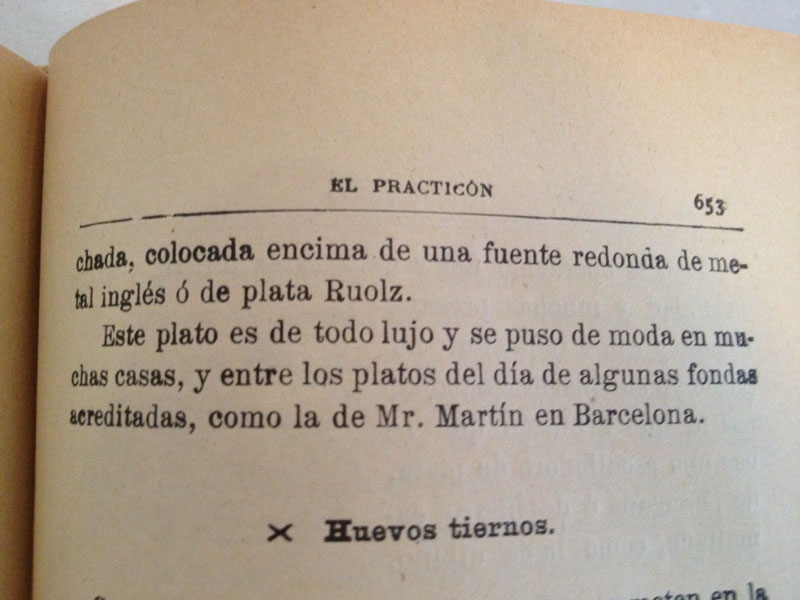 But today, of all days, I didn’t get a set of sides. Too busy rushing around organizing my two assistants. We have about a zillion things to prep today because I just found out last night that the CGE people need close-ups in order to do their time-lapse for Will’s flash-back of the mouldy food meal we shot yesterday. So now, we have to re-build the whole meal which the second unit will shoot in the adjacent studio while, in Hannibal's Dining Room set,  the main unit shoots the scene where Hannibal and Jack dine on people sausage and ffffava beans. So I am food styling in two places at once.

You just know there are gonna be a few terse words exchanged before this morning is over.

Our on-set props guy pulls out his sides and asks if I’ve got everything ready for the next scene:  Oranges, check. Eggs, check. Sausages, always. Potatoes, check. Brioche. Brioche?  He sees the frozen-brain look on my face and reads aloud from the script:  (slowly, like I’m three)

Hannibal throws an egg in the air, catches it on the edge of a knife, cracking it and holding it in place as the contents drool onto a slice of brioche with a hole already in a pan, The sausage sizzles and crackles in its own pan, almost done. 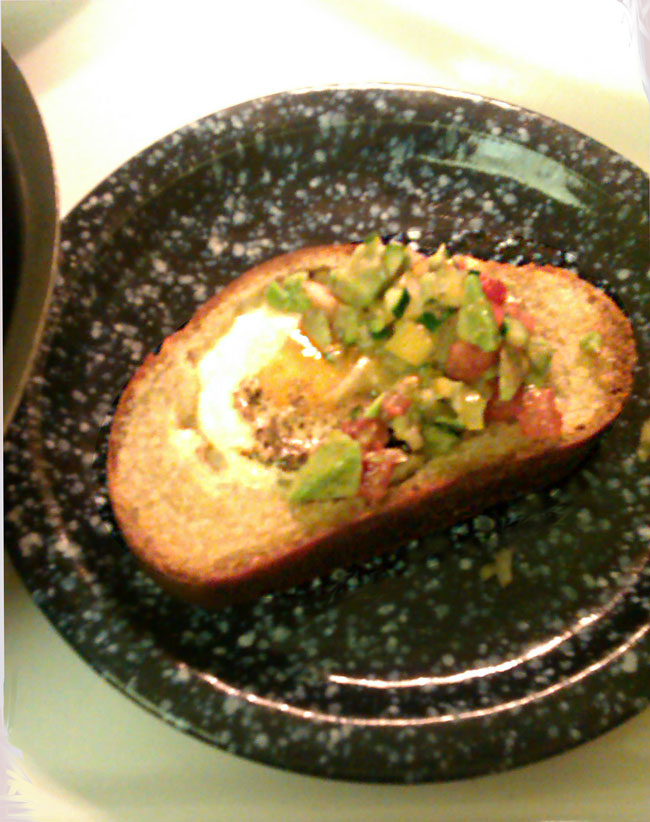 I forgot to pack the bread for the High Life Eggs. And we are in the middle of a suburban industrial zone. There isn’t going to be a French bakery out here. Bye-bye my brioche.

We still have an hour to prep while the set is being lit for the scene. I send my assistant, Kristen out into the field  (literally) to search the suburban supermarkets for challah. (Challah is Jewish brioche. There should be a lot of it on the shelves since it’s Friday – Shabbat when most Jewish families will be putting a loaf on the dinner table. GPS in hand, she roars out of the lot while 2nd assistant, Victoria and I sort through my pharmacopia of dried mushrooms for the scene where Abigail drinks from a poisoned cup.

Thanks to the food styling gods, the scene is held up a bit while Mads and the director discuss an alternative to the samurai egg master trick described in the script. They settle on a potato trick– it’s easier for the set dresser to pick up a slashed potato than it is to wipe smashed raw egg off everything after each take. So now, I have to find a couple dozen identically shaped potatoes and peel them for the knife trick. Because I need another thing to do at this moment.

Brilliant Kristen returns triumphal with 4 dozen challah buns. These will work even better than the challah slices called for in the script. The braided tops are elegantly twisted - like Hannibal himself. A near disaster turns into a brilliant result! We pick out the perfect ones - nine in all - and make them up into Spanish Egg in the Hole.

Your turn to cook now.

Didn't that story make you hungry? Better fry up some Huevos High Life.

My doctor, Rene, is from Spain. His grandmother used to make these all the time. So he volunteered to do this show-and-tell: 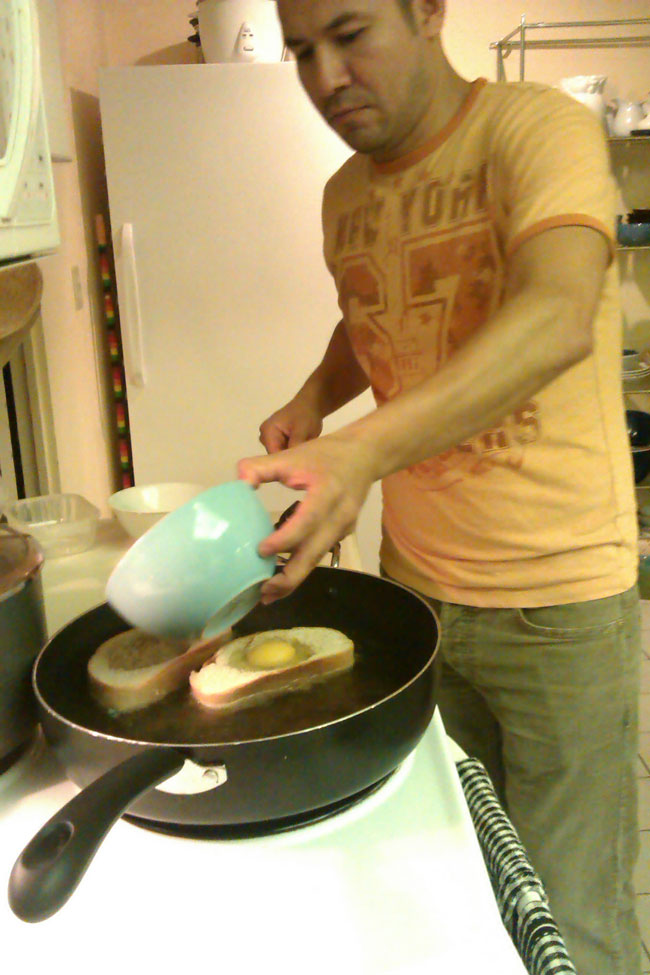 Here’s his step-by-step on Huevos High Life. You can see by his photo that a lifetime consuming vats of olive oil has kept him quite slim. So pour it on!

Using a glass or a cookie cutter, cut a round two-thirds of the way into a 1-inch slice of heavy fine-textured bread like Italian or Portuguese white loaf. Pull the bread out of the circle leaving a thin layer at the bottom. Set aside. Into a heavy frying pan, pour about 1 inch of olive oil and heat.

Break eggs, each one into its own bowl. Check to see if oil is hot by dropping a small cube of bread in. If it browns within 30 seconds, the oil is ready. Remove the test bread and put the bread slices in the oil.

Yes, that is 1 inch of olive oil. These babies are crispy bits of deep-fried goodness. We didn’t use this much oil for the shoot – Hannibal doesn’t want to fatten you up that much.

As soon as you put the bread in the oil, slide one egg into each hole and continue frying until the egg white sets, sunny-side up. Sprinkle on salt and pepper. The bread might get almost burnt around the edges but this is part of it’s charm – like the charred bits on barbecue or Portugese egg tarts. 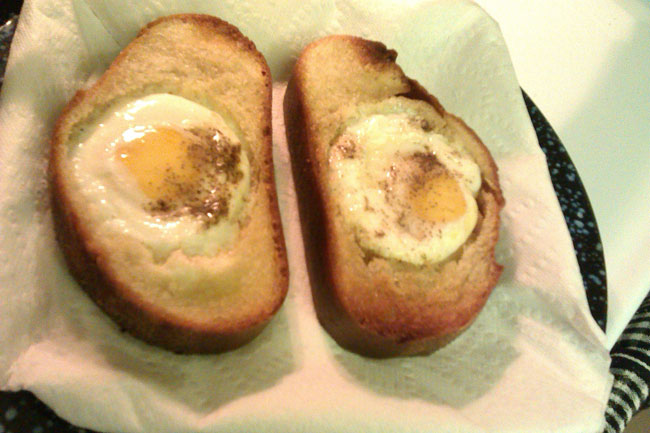 Remove and drain on paper towels.

Plate, top with salsa of your choice (we used chopped tomatoes, avocado, cucumber, peppers) and enjoy! We used duck eggs but chicken eggs are great or you could make minis with quail eggs.

Next time: Recipes for vegetarian cannibals: 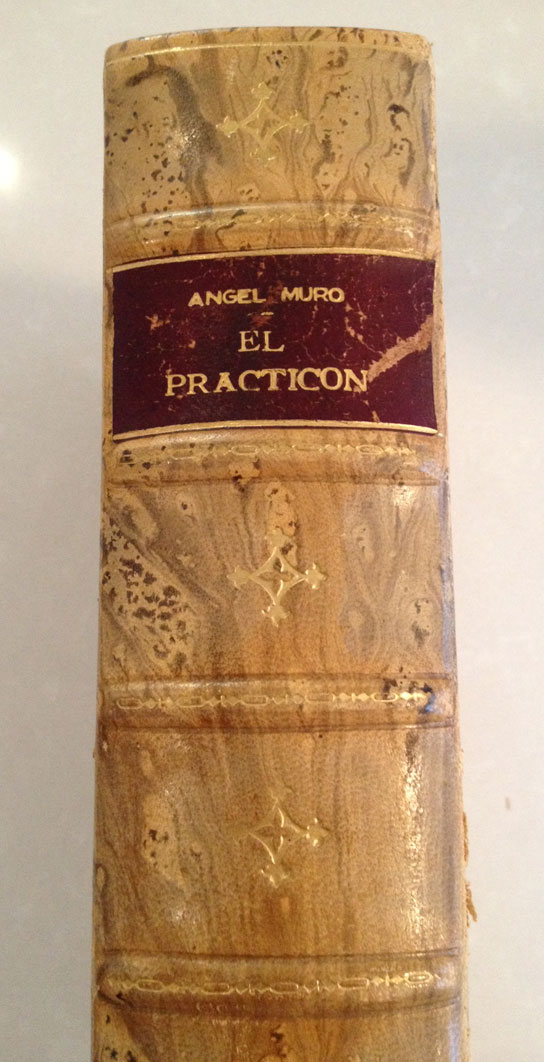