Primavera pulse drumming in my head

Thrumming in my ear

Calling in the dark.

My life as a food stylist. Alas. As I read the latest script, my mind's eye rolls over stage directions for bodies tossed from towers, dead people revived, corpses revealed, and the blood of centuries coursing through catacombs. None of this captures my attention nor gives me pause.

I re-read the script. There are several kitchen scenes but sorry, Ma’me, move along; nothing to see here: No cooking – just murder. *sigh*

But blog I must, so in the interest of Hannibal Science, and in the absence of food, I’m giving you a “recipe” for how to make your own Memory Place. Like Hannibal’s but (I trust) less bloody and perhaps a bit less ostentatious.

For this, I go to my old beat-up copy of “The Memory Palace of Matteo Ricci”, Jonathan Spence’s account of the life of Matteo Ricci in 16c. China. It was Ricci who wrote, in Chinese, “The Art of Memory” in an attempt to teach Christianity to the upper class of Chinese society.


Here’s the How-To in a nutshell:

1. Imagine a building such as a temple or a reception hall. Visualize it and, in your mind's eye, walk through it, taking note of the details of the building and its contents. Spence recommends starting with a modest palace – you can add rooms and buildings to your Palace compound as necessary. It can be a real place, such as Hannibal’s chapel or totally fictitious.

2. Visualize the thing or event you want to remember.

3. Place that visual memory a location in your imagined “Palace” with a visual "key" or detail that relates to the memory.

4. Picture that memory in that location as vividly as you can. This is where that memory will reside. When you want to recall it, you mentally picture that particular place in your “Palace” and you will find the memory there, fully formed.

The “Memory Palace” system of recall can be traced back to the ancient Greeks and Romans when, not having Google, they began to develop mnemonic systems to memorize plays, poems, grocery lists…

Here’s a simplified example: If you wanted to remember the Latin names of the bones of the upper body, imagine at the gate of your “Palace” a red-jacketed policeman on his horse with a handcuffed shirtless prisoner to the side. This will prompt the memory: Some Criminals Have Underestimated Royal Canadian Mounted Police, the first letters of the words yielding the correct list:  Scapula Clavicle, Humerus, Ulna, Radius, Carpals, Metacarpals, Phalanges.

This of course does not work for me because all I can ever picture is a garage full of umbrellas, right-hand gloves and keys.

And another foodless “recipe”: How to fold an origami heart

Alex Yue, origami artist, created the complex fold for Hannibal's heart in Episode 1. I love that he made it from the pages of a Thomas Harris book. He's working on a step-by-step for you which I will post right here in a few days so you can all make a heart for your valentine. (OK having technical difficulties but I promise I will find a compact way to post Alex's instructions. He says it's essentially a elongated "balloon" with two folded tubes inserted for veins/arteries.

Here’s a simpler one you can fold for now:
http://www.origami-instructions.com/origami-secret-heart.html

Called "Secret Heart" because it also doubles as a box that you can put messages (or tiny objects) in. I folded this one from a photocopy of a slab of meat that I trimmed into a square (what do you mean, you would rather use flowered giftwrap?)

And from the writers' room:

A snippet of Episode 2's script to show you how our writers can make us sigh, laugh and cry in just four sentences.

Now I cannot watch this scene without hearing the theme song from Bonanza. LMAO.

A few BTS shots from this episode:

There are people in this industry who are professional bubble-makers. Yes, that’s a job. We had two of them on set the day Victoria (my assistant) and I were doing liver close-ups. Pictured below is one of the bubble-makers practicing for a shot that will be reworked digitally to create the illusion of blood bubbling. Professional. Bubble. People. But they were probably looking at us and thinking : Jeez, they need TWO people to fry up one little piece of liver?

Here's a shot of me trying to get  quiet moment with my script. Your hapless reporter-from-the-set, photobombed by those hi-jinxing catacomb corpses.

Some of director Vincent Natali’s storyboards from Episode 1:

And NOW a few of your Hannidinners! YAY!! You're cooking again!!! 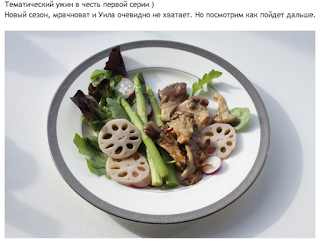 Here are some Hannidinners you sent me between seasons.

I've got more images of devilish deliciousness that you sent between seasons but I'll post them on another day since there are a lot to sort.

I'd love to share your Hannidinner photos. Send images to me at janicepoon8@gmail.com

Next week: Pheasant is pleasant unless you're a peasant.