Nothing to put here. 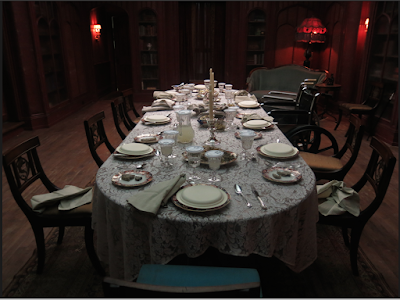 Peeking at the sets and poking around the studio

As the food consultant on Hannibal my job is to create the food you see on screen. But as part of the Hannibal team, we are all immersed in the each other's creative stew - there is so much to admire. It starts with the scripts which are so beautifully written. Then every time I come to set, I am awestruck by the beauty of the components that the various departments create. They often go unseen. Mrs Jacobi's murder scene has nothing to do with the food but it is so striking that I want to show it to you here:

First the script where it all starts:


Then the source material is considered:

Then the Art Department makes a concept sketch:

Then the set is built, decorated and actors prepared

And then they shoot it
But the lighting is so dark that you can't see anything anyway. But never mind...take my word for it - it's spectacular. Now, on to the food!

Keep your fork...there's going to be pie!

Wow, previously luckless Francis Dolarhyde sees a glimmer of good. He has met Reba and a flicker of love lights his darkness. If anyone can pull his soul back from the edge of evil, it would be she. Her metaphorical offering: a fresh whole cherry pie that welcomes love’s plunging knife. I’ve always said that you can get anything you want with a well-made home-baked pie. There is magic in that confection and it speaks directly to the heart.

By the way, if you wondered why Reba sticks a toothpick in the centre of the pie, it’s so she can use it as a knife guide to tell where the centre is: all radial cuts from there will create a complete wedges.

Get Granny Dolarhyde's dinner on the table -- or else!

Now that Hannibal is in jail, the food scenes are limited so there isn’t much cooking for me to do. Thank goodness this episode’s script calls for a flashback of Dolarhyde as a boy having dinner with Gramma Snaggletooth and her crusty tenants. I am tasked with making a dinner of bad boardinghouse food. What??!! Ugly food? You want me to make unappetizing dinner for 10? Impossible.
Nevertheless, of course I swallow my art heart and do what is right for the scene. I compose a menu of greyish mush: tuna salad, mushroom macaroni casserole, boiled cauliflower with fava beans, pyrogies in sour cream and onions. This is way harder than anything Hannibal might have cooked up. Making up the platters, my hand reaches out to embellish, fluff and decorate. NO, hand, no! No garnishing today!

Hey, did someone drop their dental plate in the vegetable dish?

One bit of fun I had: throwing giant pozole corn into the cauliflower fava bean dish. I thought they looked just like snaggley teeth.

This was one of those shoots: a cold dark Toronto night. Gobs of food to schlepp – tons of dishware to fill. The set looked musty and dusty. The food looked worse. The extras holding area was set up facing my cooking station. So the actors who were playing the seniors at the dinner slumped in these chairs between takes and watched our every move as if they were front row at a tedious avante-garde play.  Victoria, my assistant and I worked the whole night under the unamused glare of 16 glazed, bored, crabby eyes. The only break we got was an unexpected power failure when the entire building was plunged into darkness and everyone had to file out to the winter night. The crew moved on and shot the bus stop scene outside while we lounged in the craft truck waiting for the lights to come back on indoors.

On the plus side, it was my first time on set with Richard Armitage who is thoroughly charming and courteous. As well as the sweet actor who played Granny Dolaryde who was warm and bubbling with youthful exuberance until she was on camera and transformed instantly to a hollow-eyed evil harpy.

Those Dolarhydes…I guess every family is weird in its own little way.

On a lighter note: wasn't it fun to have Freddie back? Even if I didn't do a food scene with her!

More of Bedelia and her history with her mysterious dead client to look forward to!
Reba and Francis get to know each other really well. I mean really really well.
Hannibal is helpful, then NOT HELPFUL.

With all this going on, who's got time to eat? Or cook?

I'll take this time off to do some work for other shows around town: Suicide Squad, Damien, Heroes, 11/23/64 and see what the other special agents, devils and superheros are up to. I'll show you the results - and some more Hannidinners cause although Hannibal is in jail, that hasn't stopped you from cooking!

All material copyright of Janice Poon/Feeding Hannibal, except Blake painting of course and photo of LJ Chorostecki which is from Far, Far Away site. All other photos are by Victoria Walsh/Feeding Hannibal
Posted by Janice Poon at 03:54