When you see the beauty of my heart

You no longer see the beast

Blood-red black in black of night.

Empowered by the moon

But longing to burn in the fire of the sun.

Vide cor meum “See my heart” is from Dante’s sonnet to Beatrice, his unrequited true chivalric love (why are these objects of epic love always called Beatrice?). He only saw her twice but was devoted to her long after her death.

Eating your heart with flaming lips

According to Benjamin Daniels, Dante, in a dream “sees the vision of Love holding a woman (Beatrice) who is wrapped in a veil. Love says, "I am your master." In one of Love's hands there is a heart on fire and he says to Dante, "Vide cor tuum: See your heart". Then Love wakes Beatrice and feeds Dante's burning heart to her which she reluctantly eats. Love, then, becomes very sad and takes Beatrice with him up toward heaven.”

At the request of  Dino DeLaurentiis, Vide cor meum was written by Irish composer Patrick Cassidy for the film, Hannibal. It was to be the aria sung at an opera attended by Lecter and Pazzi and was used at the end of our season one and two.

While we are in Florence portion of the Memory Palace, let's enjoy Botticelli’s painting of Fortitude one of the Seven Virtues. He painted this, one of his first important commissions when he was 24. Hannibal sketches it with Alana’s face.

I tell you all of this because there is not much to say about the food in this episode. Why I hardly had to run around at all! Because it’s all hopeless.

White truffles are no longer in season and I really can’t believe I spent over $700 on fresh truffles a month ago when we shot a scene where Alana shows Verger all the luxury comestibles that Hannibal is consuming in Italy.  They were barely seen. (Dark….far away…out of the frame) Now there’s a truffle close-up and the truffle-hunting boars have all left the building. So I have to make one out of modeling clay and cocoa. I have some truffle oil that I rub on it so that Mads will get something to sniff at in the scene and really, no one is the wiser.

But how about a chilled glass of beer with good old Alana?

In that same scene there’s only wine now, not beer which the Old Alana used to love. But now having been thrown from a window, Involved in fratricide, got a girlfriend and still-birthed a baby, she is the New Alana. Cool, wiser, tougher -- not up for the infatuated three-ways of her youth.
Speaking of beer, the Doubters have been voicing concerns that beer does not have anything remotely people-ish in the recipe. Well, I don’t know much but I do know that recipes were meant to be altered.
I always thought that Hannibal had barrel-aged his beer for Alana in an oak wine barrel that had previously held body parts (eau de Mirium Lass’ arm?) but if you have any suspicions that he would stop at that, just check out these few breweries for the possibilities: Walking Dead tribute by craft beer-maker Dock Street:

This fine craft beer is made with smoked goats' brain to celebrate the Walking Dead. And cranberries of course for a nice red colour.

Another possibility, albeit remote (oh, the first three recipes aren’t?) is that Hannibal could have made glycerine from bones, cartilage and fatty tissues of his victims by boiling them to render the fat and collagen. Then, to extract the glycerine, he would have boiled the fat with lye and salt then strained off the glycerine that separates out. (what remains is soap) He would add the glycerine to his beer to add a velvety texture to the beer and to stabilize it so it keeps longer. But this is not likely since glycerine is not something you would add to a quality hand-crafted beer.

But don't get me wrong, there was a food scene

Sanguinaccio Dolce on a menu of one particularly posh place. It is an old Italian recipe that calls for fresh blood and dark chocolate cooked in milk.

Everyone loved it, not the least because it references "Blood and Chocolate" a horror movie from a decade ago that stars a very young Hugh Dancy as a graphic novel writer who gets involved with a werewolf (Kids these days -- what are you gonna do?).

Of course rest of this season is all about the Red Dragon. And although he has the teeth to chew his way through anything I could concoct, I am sad to say he’s more into tattoos than tasty treats.  So I give up. Here’s a lovely picture of his robe – since I know you were inspecting it closely and annoyed that he dropped it to reveal his muscled inked posterior.

For those of you who would like a closer look. (Hey, eyes, my robe is up here ^)

By the way, I can see why Richard Armitage has such a loyal fan base. Not only is he a gifted and dedicated actor, he is a wonderful man. All the crew adored him - especially Hair Department's - talented Karola Dirnberger and Make-up's sweet Katie Brennan. (Hello: daily tattoo application/removal)


NEXT WEEK: Dinner at the Dolarhydes’. Keep your fork – there’s pie.


Hannidinners: Too many to post but a few select ones from Australia 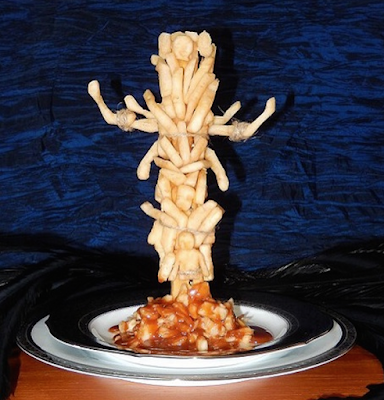 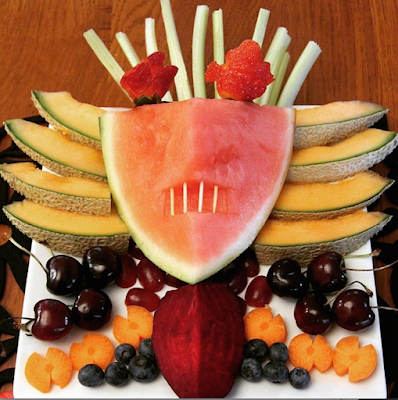 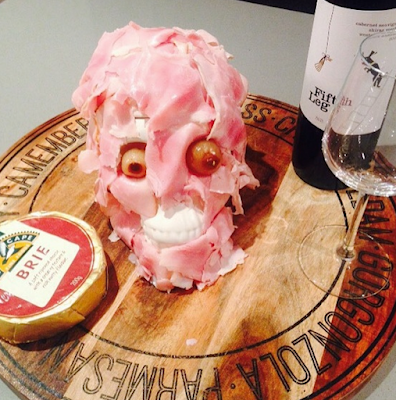 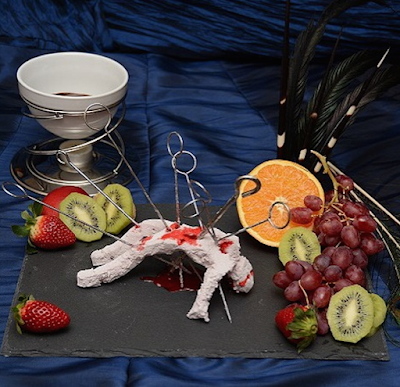 Thank you Aussieannibals! I will plug in your names as soon as I get them from eOneANZ.