In the forest of the night;

What immortal hand or eye,

Could frame thy fearful symmetry?

In his most famous poem, Blake could be describing the Red Dragon as much as The Tyger. So it's not surprising that Dolarhyde - so enraptured with Blake’s paintings, would choose that animal for Reba.

In what distant deeps or skies.
Burnt the fire of thine eyes?
On what wings dare he aspire?
What the hand, dare seized the fire?

Reba reveals her fascination and faith in Mr D when she embraces the tiger in one of the most romantic moments in Hannibal. (In light of the recent Dentist vs Cecil the Lion incident, don’t you think it’s uncanny that Dolarhyde's tiger is out cold at the dentist?) And how magnificent Reba is as the woman clothed with the sun! You almost believe she could redeem Dolarhyde's soul.

Get the selfie stick...there's a tiger passed out in the studio!

And what shoulder, & what art,
Could twist the sinews of thy heart?
And when thy heart began to beat,
What dread hand, & what dread feet?

For about a week, our “puppet” tiger lay about the studio on a slab in the zoo lab set which gave dozens of crew opportunity to sneak selfies with him. Not me, though. This food stylist would never inflict such jokey indignities on an animal, taxidermied or otherwise. Well actually, we did try to feed him a muffin from the craft service table. But he wouldn’t take it...he must have heard us mutterings about crew food. 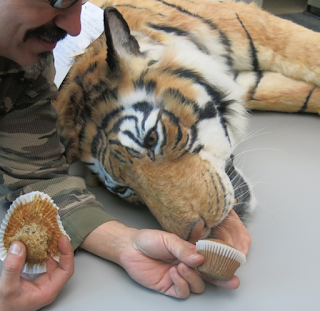 This is Dolarhyde's episode so there is no food for me to serve up this week - the only thing he eats is the Blake painting. Stephen Levitt, our intrepid props master, sourced edible rice paper from a company in Buffalo, New York. He had to drive to Niagara Falls to get the blank paper then have it printed in Toronto with edible ink on an inkjet printer. When we shot the scene, Richard Armitage wanted to get it perfect so he ate a real paper print as well. And that's why we love him.

When the stars threw down their spears
And water'd heaven with their tears:
Did he smile his work to see?
Did he who made the Lamb make thee?

Well, did he, Hannibal?

A girl's gotta eat, so I've been sneaking around doing little food styling jobs for with the other devils, time-shifters and super heroes who are shooting around town:

And all the while, YOU are busy making beautiful Hannidinners! YAY!

Next week: Just hide under the bed and scream yourself to sleep...

all content except contributors' Hannidinners copyright of Janice Poon/Feeding Hannibal