Toronto’s Vegan Food Stylist: Movie Monsters made me do it.

I confess. I was a Gluten Vegan Skeptic

As a food stylist, I first gained a world-wide reputation for my work on NBC’s Hannibal, so meat has always been my métier. Easy for me - after all, I’m an avid omnivore. I’ve always ordered off the whole menu and cooked the same way.

More and more, in film and tv, thirsting Vampire Queens are scripted to lick blood off a raw steak…cannibals must nibble on raw liver to please the director…aliens have to hunger for squirmy wormy snacks…and zombies must eat brains. The writers' room insists.

Actors, however, do not have such appetites. Enter the food stylist who must create edible replicas of these fantasy/horror victuals. And they must be tasty for the actor who is likely to do 5 to 8 takes.

The “hero” green pies in the Shape of Water movie were eaten on screen by the lead actor who has a vegan non-gluten diet. The movie was shot in Toronto, so I was brought in as food stylist to supply gorgeous food that met her strict dietary requirements.

I made eight different kinds of pie for the pie shop. The background actors were not on diets and so the background pies contained unrestrained quantities of dairy, gelatin, eggs and flour.

Hollywood stars are increasingly adapting diets that are Vegan. Or Paleo. Or Raw. And it seems now all of Los Angeles is gluten-averse. In Toronto, considered by many to be Hollywood North, most of the lead actors in the productions I work on are from LA. So I upped those factors in my food styling.

At first, vegan requests were simple: Raw hamburger for a vegan, gluten-averse actress who, as Vampire Queen (Hemlock), needed to sneak a red-blooded snack as her neighbor was making meatballs. Easy-peasy. Beets, rice flour, potatoes all riced together.  I made three vats of it. Trouble is, it looked so much like raw ground meat, the actor wouldn’t touch it.

I was still busy concocting my usual fare: extravagant fantasy meals for fairy queens (Shadow Hunters), elite afternoon teas (Handmaids Tale), fake mouldy food for time-travellers (In the Tall Grass, Fallingwater), when I started getting increasingly urgent calls to concoct food for Star Trek that was really more like food from Planet Vegan.

An episode of Star Trek called for the actor (vegan, non-gluten of course) to slice a sample taste off a slab of freshly caught Gormagander (gigantic space whales of course) and eat it raw, like sashimi. So I made twelve of these sliceable slabs out of pulverized chestnuts.


More fun stuff for the Star Trek Discovery tv series for a vegan gluten-averse actor to munch on. Pistachio eyes, though, so no nut allergies, please. I made six of them with dozens of spare tentacles:

And a nicely grilled NY Strip for a vegan actor to chomp on while four other actors in the dinner scene enjoyed the real thing. I made this vegan version with tons of porcini mushrooms which made every take delicious. And to my delight, they kept mistaking the fake steaks for real ones: I had to garnish the fake steaks with mushrooms so the on-set prop guy could distinguish the fake from the real.


Vegan BBQ spare ribs for an actor who couldn’t eat pork or meat of any kind – I developed a delicious gluten/soybean recipe that the actor would be able to enjoy eating.
For tv series Hemlock, I made kidneys and hearts (human-sized) out of agar-coated brioche for a vampyr prince to eat. He wasn’t vegetarian, but devouring raw hearts and kidneys is sort of out of the question.

Dystopian tv series "Incorporated" required actors eat "road kill" so I made tiny lungs, hearts, guts to stuff inside plastic rats, crows and other things too unsavory to mention in a food stylist's blog about vegan food.

Cooking up brains on the set of Disney’s Zombie High School Musical seemed to be a never-ending job keeping me and two food styling assistants busy cooking and colouring cauliflower for three days. Those teenage zombie street parties require a lot of brain burgers.
And sometimes, if you’re food styling for American Gods, some actor is going to need to projectile-vomit maggots/grubs or bugs or both. 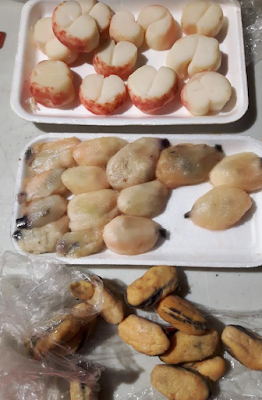 or perhaps your actor is just a picky eater...

Then there was seafood I had to food style for the fish-averse actor (in the tv series Shadow Hunters) whose character was being seduced over an extravagant seafood buffet dinner:

(top) Potatoes carved and painted to look like lobster tail medallions;
(middle) Eggplant carved into clams which I tucked into clean clamshells;
(lower) Pumpkin gnocchi which I used to replace mussel meat in the shells.
That seafood faking went well but reminds me of a dinner party shoot (tv series Damion) where I was assured no one would eat the oysters until the director decided it would be fun for EVERYONE to eat oysters. I had only brought 6 dozen and so I made fake oysters out of bananas I snagged from the craft table. 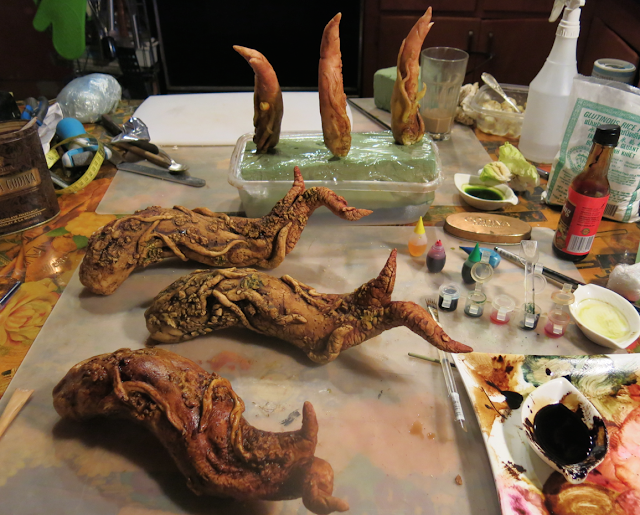 Or it’s about  being organic...

These cellphones were being ditched in a lake - but the location was in a protected woodland so the film company wasn't allowed to throw anything into the lake that wasn't organic. It also had to dissolve completely in 24 hours. So I made them out of candy.

Regardless of the craziness, it’s always a fun challenge being a food stylist working with actors in a movie world increasingly horror-filled and meaty with fantasy. And it helps a bit to be a mad scientist.

In future posts I’ll share some of my behind-the-scenes vegan food styling secrets with you: How I made Escargots, Osso Bucco, Oysters and Eggs for my vegan/vegetarian/gluten-averse Hollywood stars. And more!