Surrounded by the scent of death
Caged
Yet singing

This episode is named for Ko ko Mono, the course of preserved vegetables that signals the beginning of the end of the Kaiseki dinner. Its crisp textures and aromatic vinegared flavors sharpen the senses and prepare the diner for the final courses. Please pass some to Alana.

Ortolans, then and now

I have known for some time that ortolan will be on the menu at Hannibal’s table. This lovely bird has frequent mention in Harris’ novels: as a child he hears them in the woods beyond Lecter Castle; he listens to their song at the Café de L’Este with Lady Murasaki; he hears them again trilling in the background of a threatening  phonecall – then releases them after he dispatches their hapless cager - the restaurateur who put them on the menu and his sister in the soup. I imagine these little songbirds flitting from room to room like yellow moths in Hannibal’s Memory Palace.

Ortolans are tiny songbirds no bigger than a man's thumb. Unfortunately for their species they are delicious. Now illegal to sell for the purposes of eating, they are famous as food of gourmands through the ages. They are captured live and force-fed til they are bloated. Not with a feeding horn, as are foie gras geese and ducks, but by taking advantage of their instinct to feed voraciously at night. Romans used to blind the birds so they would think it was night and feed endlessly. Now, they are merely put in covered cages and fed nuts and fruit. When they become so bloated they cannot move, they are quickly drowned in Armagnac, then plucked and roasted whole - they are eaten in one mouthful - bones guts and all. The little head with the brain and the crispy beak is thought to be the best part. Traditionally, one covers one's head with a cloth napkin while eating the bird so God will not see you engaging in such debauched indulgence.

The early draft of the script has the food scenes fleshed out so I have already been working on the cooking and eating of ortolans. The problem I have is that eating the bird is illegal. I couldn’t buy one let alone the two dozen I would need for the dining room scene. And as dedicated as I am to this show, I am not going to get a bb gun and hie to the hills of Gdansk to bag them. Besides, Mads and Hugh may not be up for chomping their way through several pounds of whole baby birds.

I need to make ortolan fakes. The birds they used in Babette’s Feast were made of marzipan – the ones in Gigi must have been quail – judging by the size. Ortolans are not much bigger than a man’s thumb.

I don’t want to make them out of marzipan because it would be a horrible thing to ask Mads and Hugh to eat that much hot, sweet, gummy almond paste. (Hot, because they will, like Freddie-in-a-wheelchair, enter flaming.)

There must be something that tastes neutral but can be sculpted to look like a little roast bird. I experiment: carved potatoes have promise but fall apart after cooking…gefilte fish has the wrong texture…gnocchi shows promise until the revised script comes in saying that Hannibal “lifts the bird by the head and puts the body in his mouth…then draws the head and beak into his mouth blithely crushing them between his molars.” None of the things I have been working with are solid enough for that. The slightest pressure would cause the head to crack off and roll across the table.

So with the deadline nearing, I decide that marzipan is my best alternative. Mads and Hugh will just have to act like they are enjoying it. I carve a little wooden cradle for forming the birds – so they won’t have flat backs – and cut up a square of fiberglass mesh from a window screen to press against the marzipan to make the skin texture. Pine nuts for eyes and spaghetti for the little legs. I make them hollow so they will be a little easier to eat.

The shoot goes well. I’ve planned to accompany the ortolans with oysters and foie gras – just like the last controversial meal of Frances’ President Mitterrand before he died of cancer. And although Mads and Hugh hate the marzipan, they do the scene beautifully sending my hand-made baby birds to a fiery sticky death by cognac flambe – eating them whole imagining the crunchy bones, guts, Armagnac-filled lungs --  take after take after take.

The kitchen scenes will be shot in tomorrow by 2nd Unit. So I have to head back to my studio kitchen and make another flocking bunch of the baked buntings overnight.

Second Unit has a different vibe.

Usually, I work with Main Unit because the dining room scenes are long and involve dialogue. Second unit does close-ups or pick-up shots --  quick sequences that will be cut into the main action -- usually shot MOS (without sound) with a much smaller crew. The atmosphere is comfortable and intimate. The team works fast and tight.

If Main Unit is an opera house, 2nd Unit is a downstairs jazz club. I will enjoy the low-key pressure of playing by ear. Chris Burne is directing so he will be spinning LPs on an old turntable while we shoot his inventive angles. It’s nearing the end of the season so the editors have a long list of close-ups and inserts they need to polish the final edits.  I’ll tell you all about it in a couple weeks.

But now, it’s time to cook!

PUT THAT BUDGIE BACK!!! We are not roasting tiny tweeters! That’s just wrong. Here’s a recipe for the next best thing: Quail. Which are perfectly legal and can be easily and inexpensively  purchased reassuringly headless, clawless and totally gutless on a Styrofoam tray. Stuffed with sweetbreads to give your dinner that Hannibal touch.

3. Preheat oven to 400°F (200°C). On a baking sheet, crumple a large sheet of foil so it forms 6 evenly spaced shallow “nests” on which to balance each quail. This will keep the quails upright and ensure even browning.

4. Using paper towel, dry the quail inside and out. Sprinkle salt and pepper inside and out. Stuff the cavity of each quail with sweetbread mixture. Thread a toothpick through each cavity opening to keep stuffing from falling out. Tie legs of each bird together with string. Place quails on prepared sheet and place one piece of bacon on top of each bird. Roast for 15 to 20 minutes or until browned. Rest for at least 10 minutes, remove string and toothpicks and serve. Flambe them at the table if you wish with warm cognac or brandy.

If you flambe these birds, raise a glass to Freddie Lounds – the bait in the lure. It’s really really hard for that outspoken redhead to play dead. I got a message from her saying she was hiding out at Will’s place – finding only Steinbeck, Hemingway and fishing magazines his bookshelves – so nothing much for her to do except play with the dogs…

Next week: what’s black and white and read red all over?

More of you have been cooking and sharing:

Christian S sent along this photo of his deliciously fresh looking frittata with shrimp!

Rosendo M went to university in Perú and writes: "You can imagine how wide-eyed I got when Hannibal decided to cook this. Followed your directions and this came out easily one of my best plates. Can't wait for season 3!" 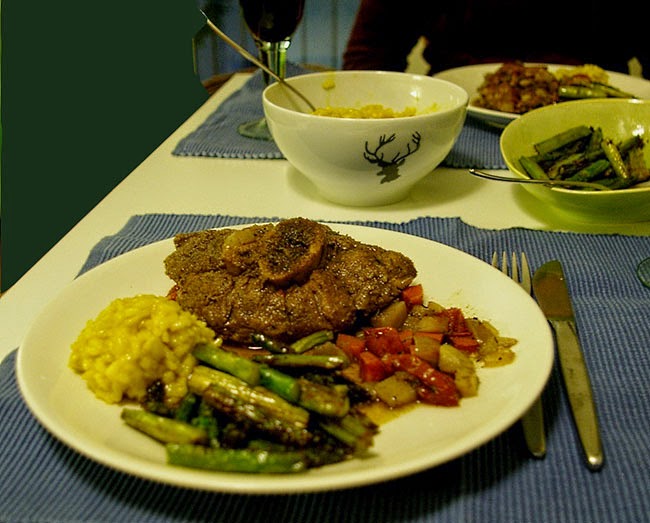 
Maru made the ossobuco with risotto milanese and reports "added sauteed green asparagus (because I felt there had to be more veggies, especially green ones.) As a dessert, to go with the red-white-green Italian theme, I combined flourless white chocolate cake, raspberry and kiwi with cranberry sauce, chopped pistachios and whipped cream.

Arron and Emma try their own ideas for a Hannibal themed dinner for two each week. Arron says,"First week we made Bacon wrapped lambs heart with Broccoli and Mash potato (We Brits love our mash!) and Emma made a lovely blood cherry cheesecake."

Next week Arron decided to go all out and made a whole arm feast! He describes, "Stuffed Pork loin with Cumberland and apple sausage stuffing and a sausage hand based upon my own! We served it with honey roasted figs, baked apple and grapes, with Dauphinoise potatoes, asparagus with cheese and dried bacon. Emma made a lovely lemon tart that also went well with the honey roasted figs & crème fraiche."

Thanks for sharing your Hannimeals - you continue to amaze me with your ability!!!
pix to: janicepoon8@gmail.com