This episode is named for Naka choko, a course in a Kaiseki dinner. It is a citrusy soup that cleanses the palate to refresh the overexcited taste buds and make the diner ready to receive the completely new sensations that will be offered in the following final courses.

I am on tenderhooks awaiting the next draft of the script of this episode. I’m fascinated by the unfolding drama with Margot and Mason Verger. And with all these mad killer pigs running around, there’s bound to be a suckling roast on the menu...eventually.

The production draft has some irresistible “chopping the ginger” lines that have me very worried about the mortality of Freddie Lounds. I have always liked her blunt honesty and her nerves of steel. I have a recurring mental image of her hurtling off a loading dock strapped in her wheelchair engulfed in flame. But that’s just me. When I see LJ on set, I think BBQ. But no worries – even after almost 2 seasons of shooting Hannibal, I have not yet become a psycho-empathetic. Your guess is as good as mine. I’m just saying, Freddie’s fate hangs in the balance in this episode but I remember how many episodes it took for Beverly to finally meet her baker, so I’m not firing up the barbecue just yet.

My first food scene on the schedule is a tense “menu a trois” between Will, Alana and Hannibal featuring a little piglet that didn’t get away. Roast suckling pig, of course.

I love suckling pig. I roast my first when I was about 13. My eldest brother had gone off to chef’s school and on his weekends home, he would teach me some of the things he had learned. We made textbook things like “Chicken Cordon Bleu” and “Steak Diane”.  Then one weekend he decided we should make a Roast Suckling Pig. Whaaat? But we got right down to it, trussing the thing up and readying it for the oven. It was simple to make—he showed me a few tricks of the trade like putting crumpled tinfoil inside the belly so the pig would sit upright. And a ball of foil in its mouth to be swapped out later for an apple. And foil-wrapping its tail and ears to keep them from burning. When it emerged from the oven it had a tan that would have impressed George Hamilton. It looked like a sculpture and tasted fantastic – crispy skin and velvety textured meat of the most delicate flavour. It was a revelation to me. After that, nothing would seem too difficult to attempt.

But back to Hannibal.

The evening before the suckling pig shoot, the script changed. Of course. The scene was originally mid-meal, (we always love a mid-meal scene - the resets are so simple) But now, Hannibal is to bring out the whole roast and then cut it up to serve to Alana and Will.  Sounds good if you are a script writer. Sounds bad if you are a food stylist. Do I roast 7 or 8 pigs so Mads can have a fresh one to carve for each new take? No. I just can’t go there. It is not easy – even for Mads – to carve a whole pig without making a giant mess all over his gorgeous mahogany table. And it’s just a little late for me to get – much less roast – seven identically sized piglets. The director and the prop master are worried about how Mads is going to carve and serve whole pig with ease for the many re-takes.

This sets my head spinning but luckily, my racing mind trips and falls into the Mud Puddle of Bright Ideas: I realize if I hollow out the saddle of the roast pig and fill it with rice pilaf and pre-cut cubes of crackling and pork, it will simplify the resets. Mads can simply wheel the rice-stuffed roast into the dining room and ladle out the servings. Then all we have to do for resets is refill the same pig with more rice and pork cubes over and over and over.

I send this idea out to the heads of Departments and everyone is happy.

Except me --  I just don’t have an oven big enough for a 40 lb roly-poly pig – the size I need to make biggest visual impact on screen. So I call up Bernard, my elfin 92-yr-old “lechon” maker and he agrees to roast me up a fat piglet. Well, two. Always back up your work – it wouldn’t be the first time a roast suckling pig broke his crispy little ears off flying across my car’s dashboard in a sudden stop.
On the day of the shoot, prep is unusually dissonant –just next to my work tables, the Theremin instructor is teaching Mads and Caroline how to play the instrument. If you have ever endured the sounds of a person earning to play the violin, multiply the earache by five and that’s two people learning to play the Theremin. Add to that the sound of steady hacking as my cleaver chops up the roast piggies and you have an oddly unsettling auditory snapshot.

Hannibal: “Will, you slice the ginger”

Will’s answer, “I already have” was dropped from the early script but when Hannibal and Will cook their first “I know it’s people” meal together, can you doubt that it’s Freddie?

Maybe it is...why else would I make Carrot Top Cold Slaw wreathed with bloodless white flowers....
Or maybe it’s just a red herring…which I hint at with a platter of Red Snapper in Singing Rice with crispy skin.


My clue to you is the fan of porcupine quills: the quill is mightier than the sword.

Want Fries with that rice?

Long before Wolfgang Puck popularized Asian fusion, Lomo Saltado was invented in Peru by Chinese slaves brought in to work the sugar plantations and guano mines (and you thought you had a shit job…) They blended stir-fry and rice with yellow potatoes and peppers to create a favorite that is cooked up daily in Peruvian homes and Chifas (Chinese-Peruvian restaurants). Made from soy-marinated beef sautéed with onions, tomatoes and yellow Aji peppers, it’s topped with French fried potatoes and served over rice. Double carbs and deep fried? How could it not become a classic? Of course, I add a dash of Freddie and use Spicy Curly Fries as homage to her hair.

And now to the kitchen for the cook-along pig:

Two recipes this week – since you may not want to wrestle a 20-lb pig into your 8-lb baking tray, I’m also giving a recipe for Lomo Saltado which will fit into a pan of any size.

1.  Preheat oven to 300°F and line the baking pan with parchment or foil.
2.  In a small bowl or large mortar, mix together rosemary, oregano, sage and salt.
3.  With a large heavy knife such as a cleaver, make a vertical slash through the skin and meat of the pig’s neck along the vertebrae between the shoulder blades ( about 4 inches long) This is to keep the skin from cracking when it browns and crisps. Turn pig over and sprinkle herb-salt mixture liberally in the chest cavity and rub onto the entire interior surface.
4.  Place the pig on its side on the baking pan and stuff the chest cavity with the orange, lemon and shallots. Pig should be room temperature at this point to ensure even cooking.
3.   Place in oven and roast for about 1 ½ to 2 hours, basting occasionally, then turn the pig over on its other side being careful not to tear the skin. Roast for an additional 1 ½  hours or until thermometer reads 150°F. Baste occasionally. Skin should be very soft and meat just undercooked at this point.Turn the oven up to 450°F. If possible, turn the pig so it is sitting upright. Roast for another 45 min to 1 hr or until skin is golden brown and crisp. (Total roasting time about 12-15 minutes per pound)


6. Remove from oven and allow to rest for at least an hour before serving.

Will used “Long pork” for this. Peruvians use beef. You can substitute chicken strips or Portobello mushrooms for the beef in this recipe.

2. Heat Spicy Fries in oven as per instructions on the bag. Keep warm in oven.
3. In a large frying pan or wok over high, heat pan til very hot. Add 1 Tbsp oil and onions. Stir-fry on high heat until onion slices have browned in places and are turning translucent. Do not overcook – they should still be slightly crisp. Return pan to heat and add 1 Tbsp oil and half of the beef slices. Do not crowd the pan or meat will not brown. Stir-fry for 2 – 4 minutes or until meat has browned but still medium-rare. Add meat to bowl of fried onions and repeat with remaining oil and beef.  With a paper towel, wipe pan clean of juices. Repeat with oil and meat. Add tomatoes and aji sauce to hot pan and stir-fry until skin starts to peel away and tomatoes start to release their juices. Add beef and onions back into the pan and mix well until heated through. Add hot French fries and toss until everything is well coated with the juices. Add salt and pepper to taste.

Next week: Ortolan: Several little birds will sing no more...

You've been busy cooking but not too busy to share with other hungry readers by sending me (janicepoon8@gmail.com) photos of your creations inspired by my Hannibal recipes!

Here's a photo sent a few months ago by Joshua, a French-Canadian taking fashion in France. He said my Hannibal dinners inspired this photo he shot for an assignment. This episode's plates show how his photo inspired me right back. Hannibal thanks Joshua!

Raja wrote: ...stuffed the trout with garlic and onion, fresh basil and rosemary, lots of butter and cooked it on a frying pan for a short while. I then placed it in the oven to get the whole fish to cook. It came out HEAVENLY DELICIOUS.

John wrote: Every week we get the family together for dinner and the latest episode.  I thought I would share one of my creations: Pork loin with a raspberry sauce, rosemary bread, and a spinach kale salad.
Evren says...as the daughter of a food photographer I've grown up seeing food stylists work   Huevos High Life with some brioche loaf slices and tomatoes for a cheeky midnight snack.

Vegard writes: inspired by liver omelette from Suziikana. Very similar to the one in the episode, but with a different garnish (cucumber leaves and tomato roses to go with the tomato salsa). The filling is chopped chicken livers glaced in concentrated meat stock, herbs, spinach and potato. Quite delicious! 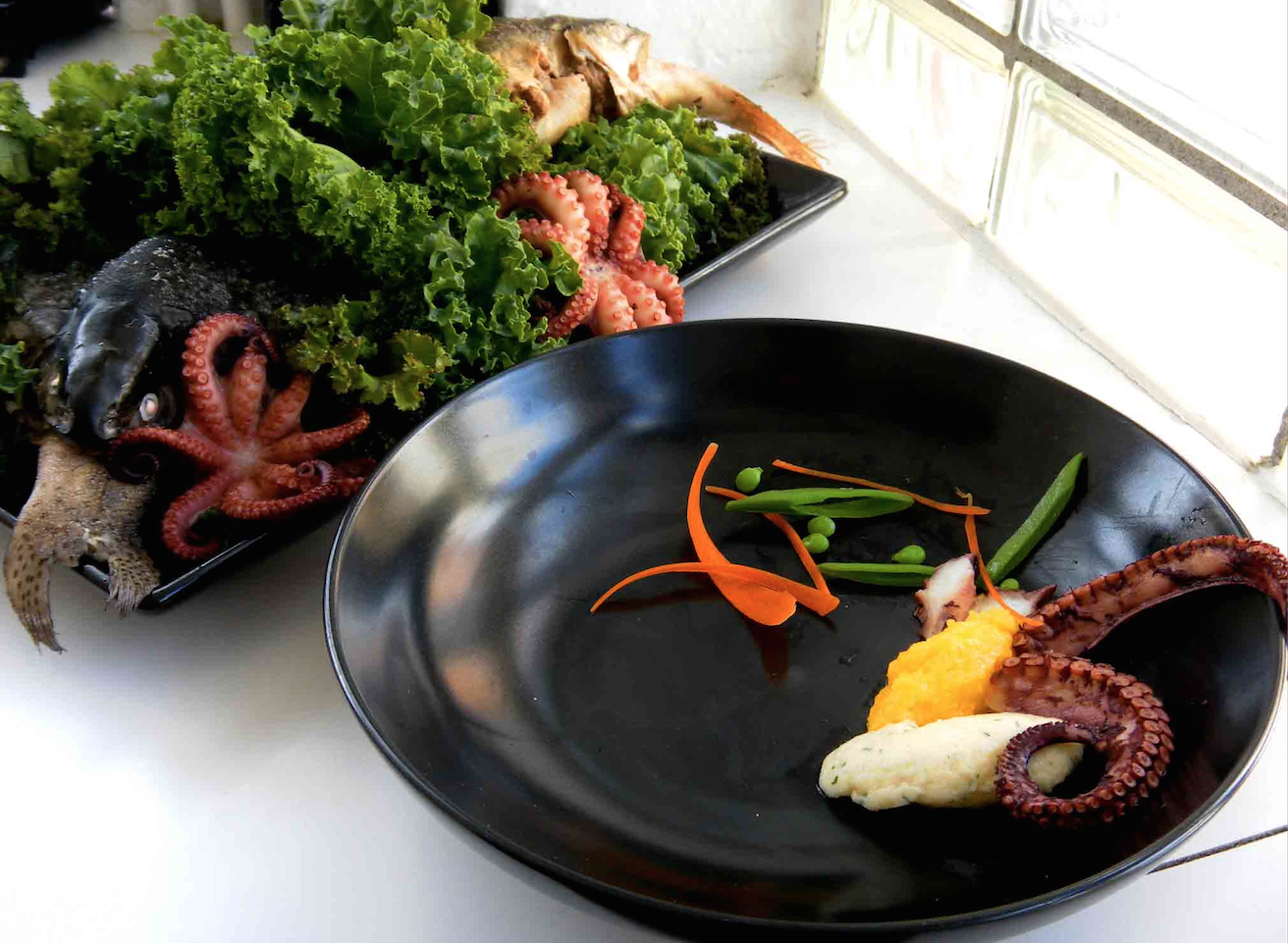 Tee, shocking and rocking the supermarket says: people kinda freaked when I asked for live fish--gotta settle with just the "fresh" ones and not live ones...also made scallop quenelles

Thanks again for sharing all those lovely pictures!