Ep 8 Fromage: Paella on the Rocks

He strings you along

When you are the food stylist on a show about a cannibal, and the props buyer asks for buckets of sausage casing, you know it’s not for packing wieners for a picnic. Something really awful is going to happen.

By the time I get the script, I already know it’s going to be grisly but nothing in my little life has prepared me for the opening scene. Not happy just impaling nurses with IV hangers, or sticking girls on staghorns, our dear writers are making people into instruments out of split larynx and spilled gut.
With this visual in mind, who can cook? I sink into my sofa and a memory rises: my brothers and I happily making a drum out of a rabbit skin and a #10 tin can while, beside us in the kitchen, our father cooked the little ex-hopper into a fricassee. There’s a fine line between the hungry and the heinous. We shudder at the sight of a flayed beast but salivate when we smell a roast. From vegan to carnivore the boundaries seem fuzzy. But not so cannibalism. It is a thing so taboo that, in many countries there doesn’t even have to be a law against it.

Why does Hannibal eat people? In a show that is all about empathy, there is no degree of empathy that can help us understand that.
Speaking from the deep of Hannibal’s mind, Bryan Fuller, our incredibly brilliant show writer/creator says “Eat the Rude.” Of course, Hannibal hates rudeness. I, the food stylist speaking from the deep of my stomach say “Cook the Rude.” After all, the essence of cooking is refinement. It is civilization by ritualization. By sliding scale as Levi-Strauss says in The Raw and the Cooked.
I guess Hannibal – who could have been such a nice boy if he hadn’t slid into darkness, cooks unruly people to make them better and worthy of his respect. With his batterie de cuisine, he cuts, beats, whips, tosses, binds and grinds them into fine pate or a delicate curry. Then feeds them to each other just for fun. We know he really likes Will. And Alana because Will does. And Bedelia too. But does he like them the way I like duck? With a nice chianti?

So judgy. he needs to lighten up.

So thinking of Hannibal’s subtlety and of his deceptive nature, I decide not to make a lot of the gut theme in the script. A big pile of sausages or chitlin stew would be too obvious. 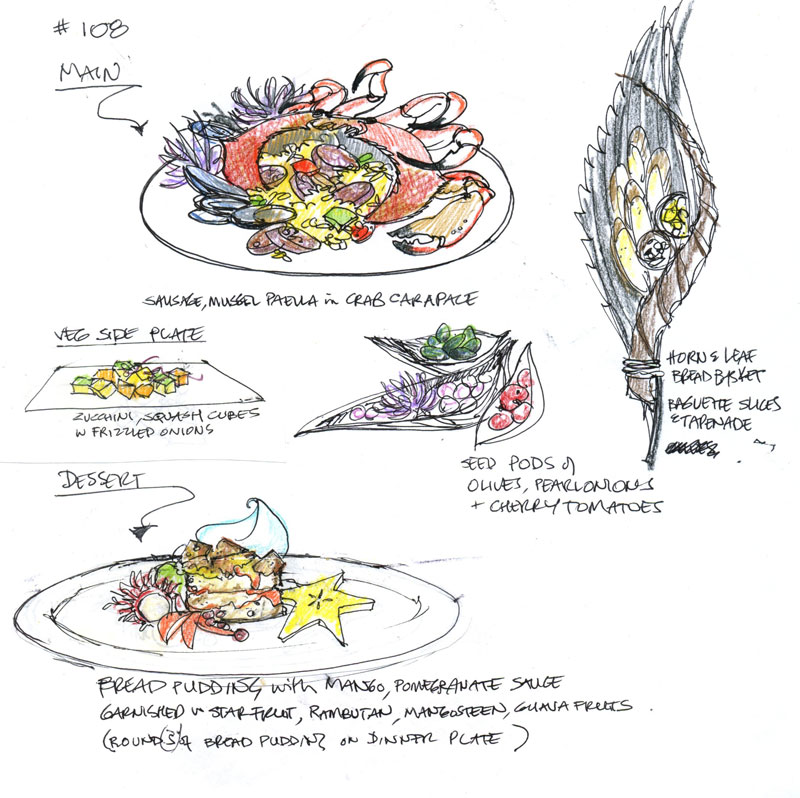 I choose crab. Because crabs walk sideways. Never straight. With those big pincer claws always raised and ready to pin you in place and rip you to bits. Evasive and easily provoked -- deking to his right as you lunge to his left. So, Hannibal’s dinner scene will feature crab stuffed with saffron rice and – just to show you he does have the guts, a little bit of sausage.

Put the rice on, Sugar. Time to cook dinner.

Paella on the Rocks

While we are doing this episode, Jose Andres is jet skiing in the Caymans with Anthony Bourdain but he takes the time to email me – paella does not have sausage. So if you make this with sausage, please call it pilau.

This is a recipe from the marginalia of my cookbook, The Cocktail Chef. Paella cooked aire libre. Take your groceries outside into the summer’s evening light and try it. With a lot of sangria.

1. Make the fire’s perimeter out of several large rocks of the same height, or use an iron tripod that can provide level support for your paella pan (or deep sauté pan with a lid).
2. Build a wood fire under the pan.
3. When the flames are licking hotly at the sides of the pan, add oil, garlic, tomatoes, clams and mussels. Throw in that glass of wine you’ve been drinking and cover. Simmer until mussels and clams are just cooked, removing them from the pan with a slotted spoon and transferring them to a mixing bowl as soon as the shells open. Mussels will open first and fast. Clams take longer – be patient. Set cooked seafood aside.
4. To the pan, add the rice and saffron plus enough liquid (water, stock, wine, Bloody Caesar) to equal twice the measure of rice. Allow all to boil gently. If mixture is boiling too rapidly, spread the wood away from the centre of the fire. Boil until the top of the liquid is level with the top of the rice.
5. Scoop out all flaming wood under the pan to lower the temperature, stir rice quickly and cover. Continue cooking until rice is tender (about 20 min). Return seafood to the pan along with cooked chicken or sausage and cover. Cook just until hot.

Two cannibals are having dinner. One says, “I hate my mother-in-law.” The other replies, “So just eat the noodles.”