Is there a doctor in the house who isn’t a psychopathic killer monster??? Get me out of this episode, nurse! As Hannibal’s food stylist, I’m looking furtively for food scenes, scanning the script with my hand over my eyes because every line I read is a horrific scene I’ve revisited. Five times.

That’s because we are in the Goldenrod revision – that means the script has been changed five times. Back in the paper script days, each revision would be issued on different colored looseleaf paper (consecutively: blue, pink, yellow, green, then goldenrod and on and on until you were in double goldenrod hell) We would clip these new colored pages into our first draft white copy to keep our script updated. Now it’s all paperless but the revisions are still named by the old colors. Except there are no colors…cuz there’s no paper. Gone like the hands of time.

Menu planning has its ups and downs

In four days the food has gone from this:

...through a couple of rewrites to this:

“Nice to have an old friend for dinner”, says Hannibal at the top of the dining room scene as he presents plates of Lamb Tongues en Papillote to Dr Chilton and Alana Bloom. So, let me see: 3 people times 5 pages of dialogue minus 3 pages of flashbacks times 2 tongues per plate. Ummmm. That’s 72 tongues equals 24 tongues each. I don’t think any of the actors want to eat even the tip of 24 tiny tongues. Especially not the tip.

Is Raul Esparza a vegetarian? Does Caroline Dhavernas hate lamb? These are the actors doing the scene with Mikkelsen. My queries to the producer disappear into the black hole of unanswered emails.

I think about this as I watch my test batch of lamb’s tongues poach. They curl up into grayish-mauve lobes of what look like blind oversized larvae. They are not tempting.

No matter how ghoulish, I want the food to look like something you really want to taste –against your better judgment.  Every character in this show is on a knife-edge. Will teeters on the edge of sanity; Hannibal balances between truth and lies; Jack is cold, then kind. I want the food also to have the tension of precarious balance: repellant but tempting. Slightly off-center.

Prepping for the dinner scene, I hand-shape the tongues individually out of  a modified Kibbeh recipe – bulgar ground with beef stock and mild spices. I make them bigger than lamb tongues because I want them to look like children’s tongues – out of the mouth of babes. (FBI babes?) Then I steam them and shade them with food coloring.  I make 60 which luckily, turns out to be exactly the right amount. If the director had asked for one more take I would have been in trouble. Sometimes you get lucky…
Sometimes you don’t…

Toto, we are not in Norton country

Two days before the shoot, another script change that has Hannibal garnishing wine jelly with Norton grapes.

I call Chrysalis, the largest grower of Norton grapes in the US. Could they Fed-Ex us some? Sorry, they just shipped out the last of their Nortons  but they would phone around to some of the small producers.

I call my brother-in-law who studied to be a vintner in Australia. Yes, says Adam, they are in the opposite season Down Under but the grapes are still green.

I call John Szabo, the Master Sommelier who contributed wine notes to my Cocktail Chef cookbook. Nothing local that resembles Norton. Can’t I use another large round table grape? No, I say the script calls for Hannibal to peel a Norton grapes to show the flesh is the same color as the skin. All the available grapes have pale green flesh.

I call Jojo a crime reporter pal of mine who knows a lot of local wine-makers. OK, I’ve scraped the bottom of my wine-pal barrel.

Chrysalis calls back empty-handed. I knew that.

I go – as we all ultimately must, to Google. The Great One links me effortlessly to Dr. Violetka Colova of the Centre for Viticulture and Small Fruit Research at the Florida University. She is the world’s leading authority on Norton grapes. She is charming, sympathetic and full of ideas and eye-opening information but has not one single Norton grape in her vast research greenhouse.

Only one day left to solve this. I buy a couple flats of large round red grapes and start testing materials: wax, shellac, latex. In the end, I peel the grapes, dye them in purple food coloring, then dip them in some thinned purple pigmented beeswax that I had left over from an encaustic art project. Once the wax hardens, I dust the grapes with white eyeshadow to give them a just-picked bloom. By 10pm, my entire kitchen is decked with little purple balls dying and drying on wire racks. In the middle of my grape-elf work, I get a call from the director: could I bring a couple of grape alternatives. Oh, hey, no problem. I rethink my shellac idea and try painting some of the grapes with nail polish. The results are not bad at all. My call time is in 5 hours.

I wake up in 3 hours to phone my assistant, Ettie: On the way to the shoot, please stop at the 24-hour drugstore and pick up an assortment of dark nail polish. We rush to the studio and paint up a batch of alternative grapes. They dry just in time for the director to say he prefers the wax ones. Well, that worked out well.
As I write this, I’m trying not to worry about the champagne towers I built yesterday for a party scene in “Dr. Cabbie”, a film about a cab driver who becomes famous for delivering babies in his taxi. They are shooting the scene now and I’m not on set to coach the actor as he pours the champagne in that top glass --  camera rolling as the champagne floods over, filling the pyramid of glasses – or not. I hope the props guy is saying, “Well that worked out well.”

Now, to get to the meat of the matter, the recipe for this week’s episode:

It’s a little tricky to get lamb tongues so I’m giving you a recipe using cooked beef tongue which you can buy by the pound at a deli (or brine and poach a fresh one yourself.) For Hannibal, I folded origami lotuses out of parchment paper to present the tongues but here, I’ll give directions for folding simple foil packets to bake the tongue in. Elegant packets can be made “en Papillote” out of heart-shaped paper if you know the technique and have the parchment, but this foil version is dead simple. 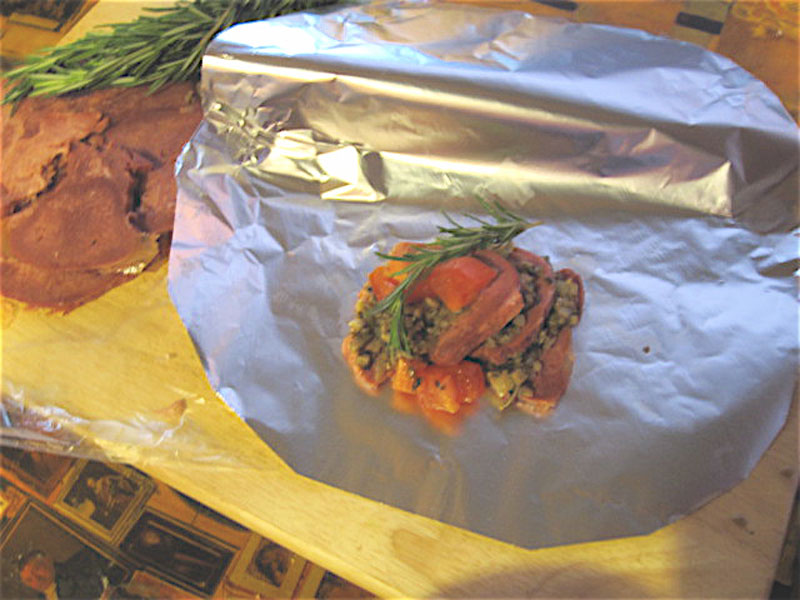 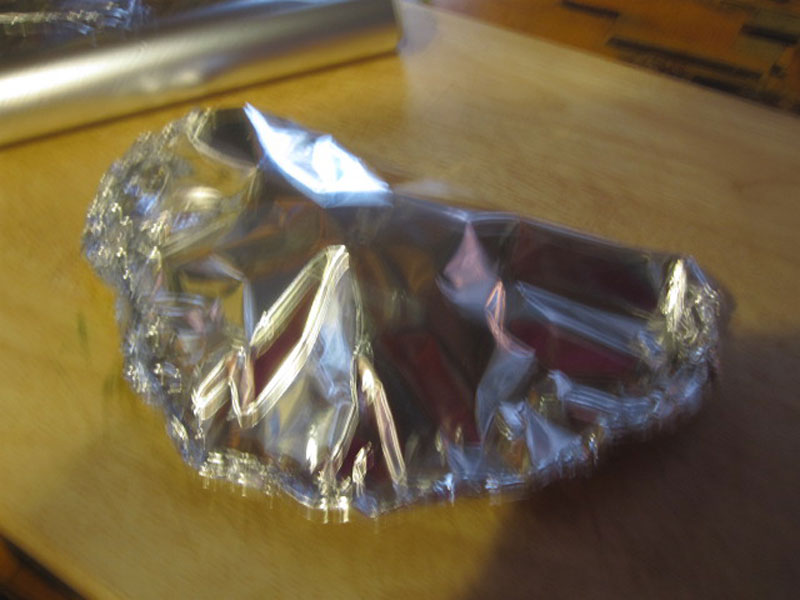 For the shoot, the vegetable accompaniment was steamed squash – to give the actors something to eat other than the bulgar tongues.