I was having a bit of trouble with re-writes of my current children’s book, so when the food styling job for Hannibal came up, I jumped at it. Nice way to blow the cobwebs out of my brain, I thought.
Understatement.

Hannibal dines alone,
but in the darkness beyond
toil a crew and many cooks.

Gravel crunched as I steered my battered hatchback into the compound. Behind me, the chain-link gate rumbled closed with a thud. Above, the guard eyeballed my license then waved me on as if I were an annoying insect.

Visiting the family felon at Folsom? No. This high security is all about pork.

“Here to pick up the lungs,” I said, thrusting my documents at the gatekeeper.

“Food stylist?” He seemed oddly familiar with the term.

“Yes, for a new tv series we’re shooting called Hannibal,” I said, knowing the words “tv” “shoot” and “Hannibal” will open all doors. In this city, people love the film industry and will bend over backwards to help. Several horror films are being shot locally and I’m probably not the only one shopping at the neighborhood slaughterhouse for fake brains and human-sized organs.

“Hannibal,” he considered. “Like, the cannibal? He eats people, right?”

“He’s a connaisseur of human offal and a gourmet chef,” I said defensively. I had read an early draft script of the Hannibal pilot and was thrilled with the character I was to help portray through the food he cooked and ate. Urbane, educated and rich but unforgivably evil. He’s intriguing.

Watch out, they say:
Hannibal will steal your heart
-- and your liver and lungs…

The script called for close-ups of fresh human organs. Well, almost human. Thank goodness pork hearts, lungs and livers are almost indistinguishable from those of people. I could use them in the show to stand in for Dead Girl de Jour parts. Lucky for me, there’s a pork abbatoir 5 minutes from my studio. Anyway, I had made the hundred phone-calls, signed the mile-long paperwork in triplicate, shown my ID, given my first-born and was here for my hot lung. (Hot is what they call it when it is fresh off the kill floor. I did the crossword with the guard while I waited for it to chill to regulation temperature.) 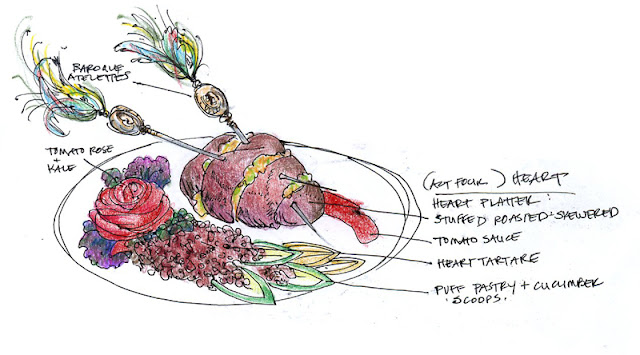 The best thing about cooking for Hannibal is the challenge of the unknown. My studio kitchen has been full of discovery. The lung turned out great. Not surprising, as it is wonderful in German Sour Lung Soup, as well as Dinuguan, a yummy dish my Filipini neighbor makes. 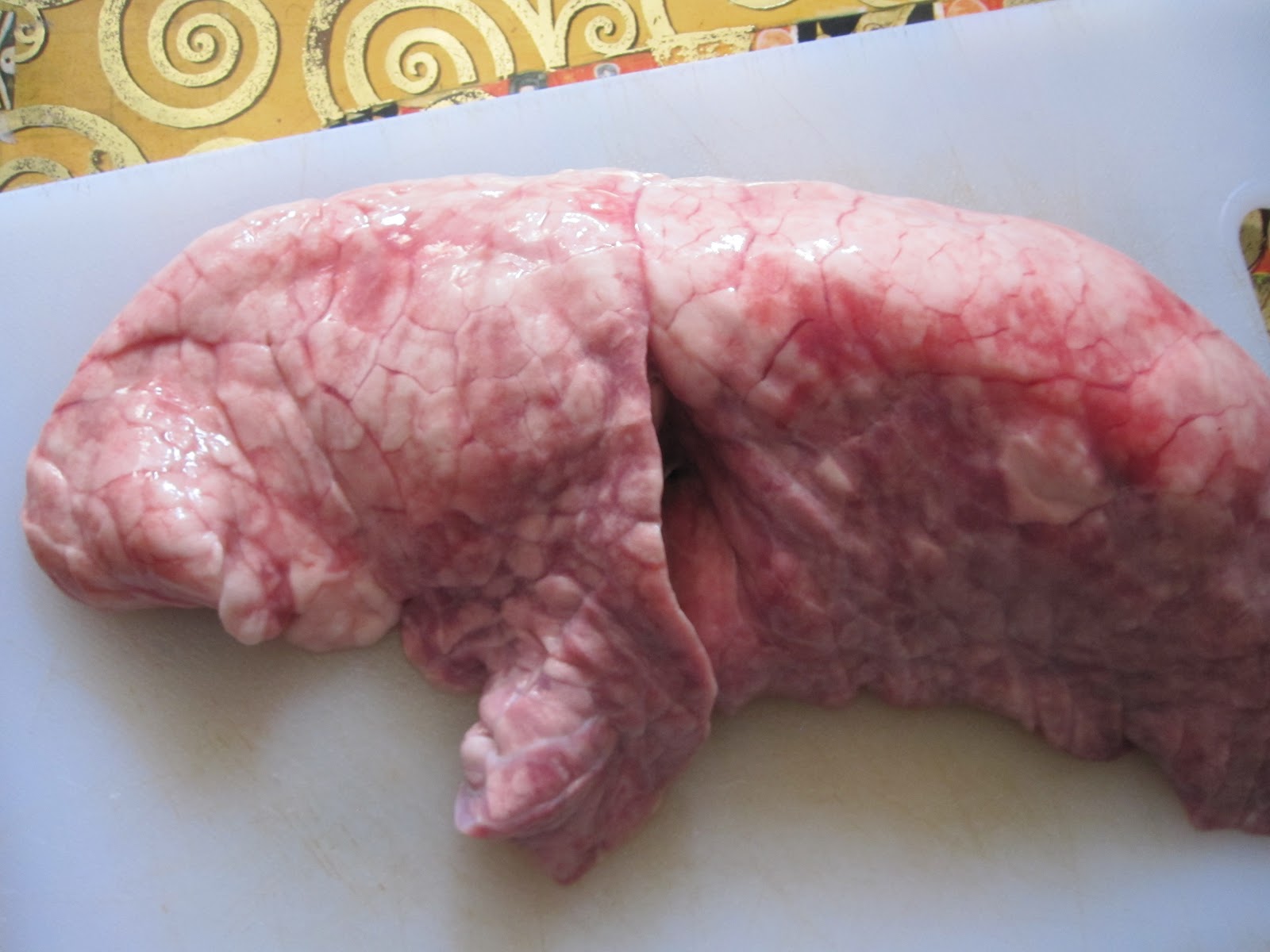 If you decide to cook up some lung, a warning: if you frighten easily, don’t try to vacuum-pack any fresh whole lung you may have left over. It balloons up in a way that threatens to blow up the house. I know, who has leftover lungs? But you buy them in pairs and you might not want to cook both lungs. Just wrap ‘er up and hello, Frigidaire. Three months later, when your loved ones are clamoring for more Lung Bourguignonne, you’ll have spare body parts at the ready! For those less likely to love lung, I’ve also included a recipe for liver.

TV Dinners :
Get out your pans
for a serial cook-along
with Dr Lecter 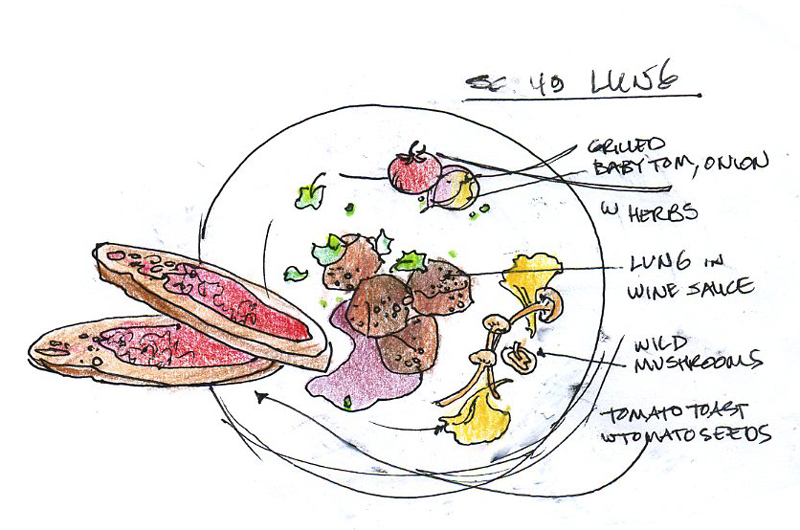 Veal lung is best for this dish as it its more delicate in flavor but it is not as widely available as beef lung which is sold by most Asian butchers. Pork lung is great if you can get it. Or just skip the lungs and double the amount of beef tenderloin. For the first episode of Hannibal, celebrity chef Jose Andres, our illustrious food consultant, has Hannibal cooking Lung au Vin based on Julia Child’s Coq au vin. The “au vin” recipe here is simpler and based on Beef Bourguignonne. Prepare the lung for cooking by soaking it, cubed, in salt-water overnight in the fridge. Squeeze out the water before cooking. Serves 4

1. In a large deep frying pan, heat butter over medium-high heat. Add bacon and fry until lightly browned and fat has been released. Add shallots and sauté til soft.
2. Add flour and stir to make a roux. Cook until lightly browned.
3. Stir in wine and stock, whisking to smooth out any lumps of roux and cook, stirring frequently, until thickened. Set aside.
4. In a large sauté pan, heat 2 tsp olive oil. Season beef with salt and pepper, add to pan and sauté til medium rare. Remove from pan. Wipe pan dry with paper towel and return to heat with 2 tsp olive oil. Add lung and brown, stirring constantly til browned but not releasing too much liquid. Remove from pan. Wipe pan dry and return to heat. Add 2 tsp olive oil and half of the mushrooms. Saute til mushrooms begin to release moisture. Remove from pan and repeat with remaining mushrooms.
5. Return wine sauce to heat and bring to boil. Add pearl onions and carrots and simmer til tender. Add lungs, beef and mushrooms and simmer just til heated through but beef still medium-rare.
6. Serve with herbed rice or buttery mashed potatoes.

By Scene 45, Hannibal, ever the curious gourmet, has ended up with a bit of liver that he needs to make into something meaningful. We’ve all done that – compulsively picked up something interesting in the shops and now, at home in the kitchen, staring at that exotic purchase thinking: OK, how will I work that into the kids’ dinner? Maybe I’ll just tell them it’s chicken…

A spicy twist on an old favorite, Liver and Bacon, this dish is sensational served with saffron rice and a cooling dollop of sour cream or yoghurt. Tandoori spice mix can substitute for smoked paprika.
Serves 4

1.  In a small bowl, combine marmalade and lemon juice. Set aside. Heat sauté pan over medium-high heat and brown pork belly slices on both sides. Add marmalade mixture to pan and toss to coat evenly. Heat until marmalade starts to bubble and reduce. Set aside in warm oven.
2. Drain liver and dredge in smoked paprika, coating both sides heavily. Heat sauté pan over medium-high heat. Add 1 Tbsp of the butter. When butter is bubbling, add liver slices to the pan and fry for 1 minute, turn and fry other side for an additional 2 minutes, or until meat is medium-rare. Remove from pan to a covered warm platter. With a paper towel, wipe sauté pan clean of any burned spices and repeat with remaining slices.
3. When all liver slices have been cooked, arrange on serving platter, top with pork belly slices and drizzle any remaining marmalade glaze over liver slices.

Next week: Lovely loins for two in a red, red sauce