Hannibal feeds Jack
a meal of thighs for two.
Others wait in rooms beyond.
Boned. Wrapped tight. Frozen.
Meals for another day.

Reading the production draft of Amuse-Bouche, Episode 2 of Hannibal, I get drawn into the action – the fear, the shock, the sudden plot turns. I forget I’m the food stylist – I’m supposed to be looking for the food scenes. I break into a nervous sweat when I read the part where the mushroom men are discovered.

I don’t mind occasionally examining a piece of toast to see if I can see the face of Mary, but after reading this script, I am afraid to look in my fridge in case I see a nose in the box of Shemeiji mushrooms I've been harbouring.

But I must look, because I need to check out the pork loin I’m using to simulate a Roast of Girl.  I am designing the menu for Hannibal’s dinner with Jack – a roast loin of pork, he lies. I am learning that Hannibal lies about everything – except perhaps when he invites Jack to bring his wife over, saying, “ I‘d love to have you both for dinner.” 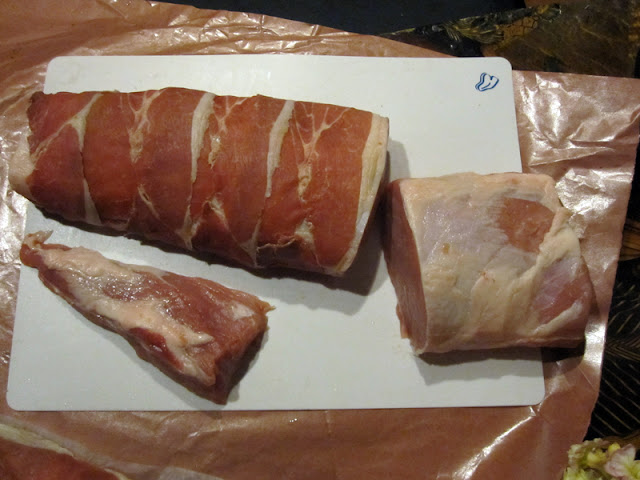 I call my nephew who is a sports medicine intern. “Hey Jay, are there any muscles on a woman that are big enough to make into a roast?” Thighs, he thinks. OK. I email my  niece who is a physiotherapist. “How big is the thigh bone?” About 1 ½  inches diameter by 18 inches long, Chantelle says. Check. Of course, I cross-reference with Dr. Google. 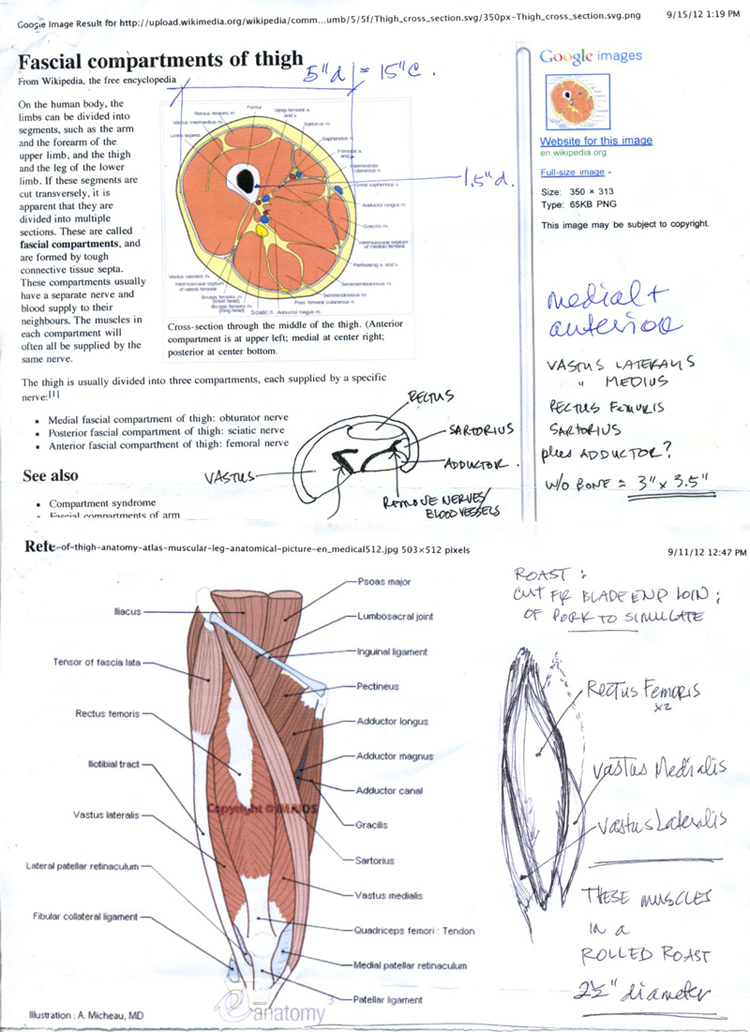 To simulate a woman’s thigh, my pork roast will be about 3 inches in diameter by 10 inches long. Made from 3 different thigh muscles, it will be stuffed and bound.

Jose Andres has gone over my sketches and menu and made some mouth-watering suggestions (crystallized apple garnish, Cumberland sauce) and sends me an inspiring photo of his glorious bone-in rib roast.

I decide to stuff the roast with a spinach/mushroom crumb to honor the mushroom men who are growing in the backs of fridges everywhere. Then I’ll completely wrap the roast with slices of proscuitto – to make it look like it has a thin skin.

Maybe a pear compote to dress the table, some scorched red tomatoes clinging to their burnt stems. And some frenched green beans. 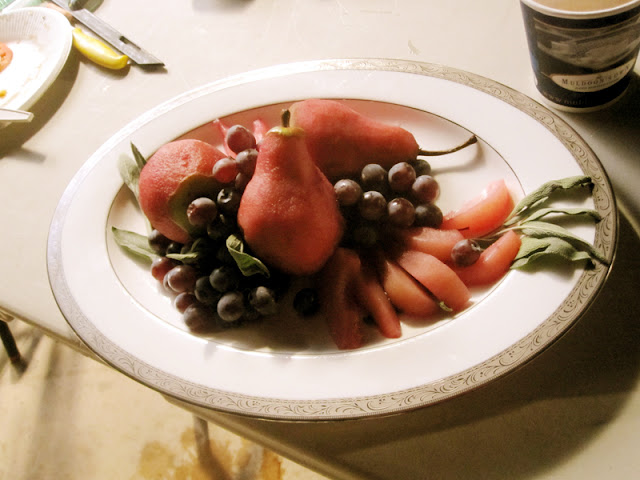 A food stylist always has to include something that the actors can eat take after take after take -- usually a vegetable cut in small pieces so they won’t find themselves with a mouthful of food when it’s time to say their lines. Green beans will work here. Lawrence Fishburne, who is playing Jack Campbell, can’t eat nuts, kiwis or eggplant. Mads Mikklesen, our Hannibal, will eat anything – with great relish. 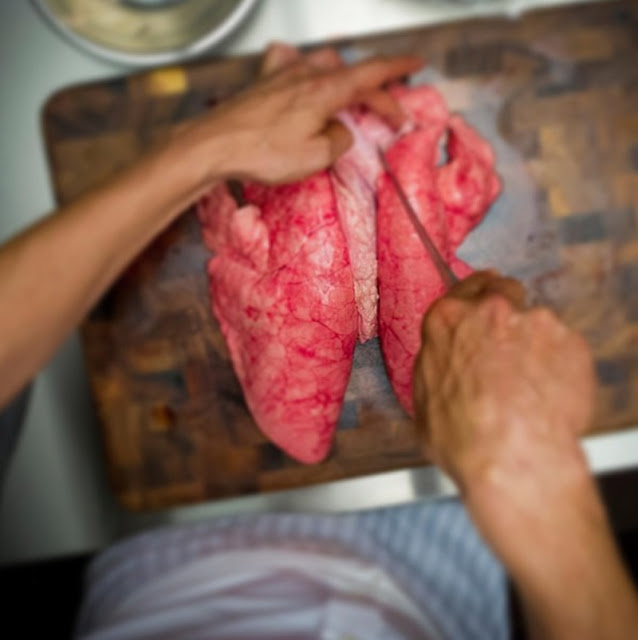 OK, OK - I know this is from episode one but I just got the link today and it’s so pink!

Enough, watching Mads cook. Get out your knives, it’s time to cook along with your favourite cannibal.

Here’s my recipe for episode 2: 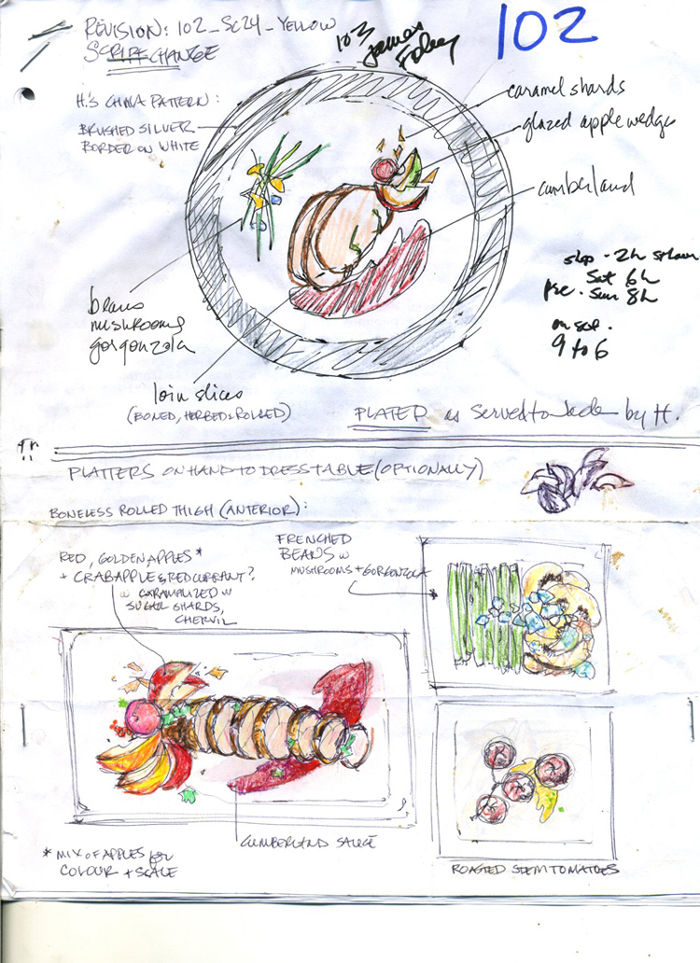 Why veal? Because, according to William Seabrook, that’s what human flesh tastes like. Back in the 30s, he was a reporter for The New York Times and, in researching cannibalism, asked a friend who was interning at the Sorbonne to procure for him a piece of healthy human flesh. He cooked it up and promptly declared it to be stringy but delicious – and tasting exactly like a good piece of veal. So instead of the pork that Hannibal claims he is serving to Jack, we are substituting veal. With zeal. To the kitchen!

1. Place a half bag of spinach in a plastic zipper bag. Zip partially closed, leaving opening for steam to escape. Microwave for 1 minute. Remove to a strainer to drain. Place drained spinach in cheeesecloth and squeeze dry.  Set aside. Repeat with remaining spinach.
2. In a sauté pan over high heat, melt 2 – 3 Tbsp butter and add about 1 cup of  the mushrooms. Cook until moisture is released from mushrooms and re-absorbed. Season to taste with garlic, salt and pepper. Remove from pan and repeat with remaining mushrooms.
3. Preheat oven to 400°.
3. In a food processor, combine half of the spinach, mushrooms and breadcrumbs. Pulse until finely chopped and combined.  Remove and repeat with remaining.
4. With a sharp slicing or boning knife, slice a pocket in the veal to within ½ inch of the sides. Season inside of this pocket with salt and pepper and stuff with spinach/mushroom mixture. Transfer to a roasting pan and place slices of pork fat on top.
5. Roast for 20 minutes or until veal is medium-rare. Rest for 15 min before slicing. Serve with Cumberland Sauce. 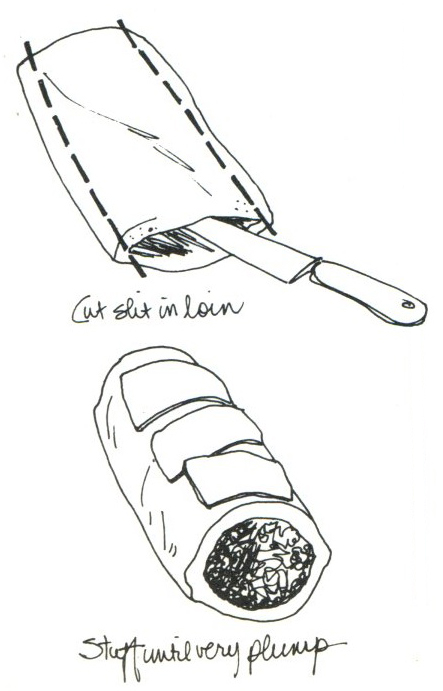 Combine all ingredients in a small saucepan and bring to boil over medium heat. Lower heat to simmer until reduced by a third.

Next week: A groaning table of Head Cheese, Liver Pate, Galantine of Girl, Carpaccio and a delightful Charcuterie Platter showcases Hannibal’s culinary talents. You'll enjoy his skill as gracious host. Unless you are a vegetarian. Or a slim young brunette with a wind-chaffed complexion….