Twins in the dark.

Be free and bleed.

This episode of Hannibal is named Yakimono -- the course in Kaiseki dinner that is grilled meat, often marinated and skewered then seared over hot coals.  Pretty much describes everyone in this episode after they each have a run-in with Hannibal.

When I get the script, I use the search function to get a quick idea of what food I will be required to make in the new episode. In Scene 51, Hannibal is taking a roast coming out of the oven. And that’s all. What, no smart dinner parties this week? I have a little anxiety attack -- the only thing worse than being overworked is not working.

There must be more food scenes somewhere...

I read through the whole script. It’s a jaw-dropping page-turner. I see the plot is thickening and boiling on so many burners it’s not surprising that Hannibal has no time to make dinner this week. I know how I feel after a week of having a lot of people over for a big party. Finding their cigarette butts in the herb wall. And he had to make that clay roast dinner too. Plus have a big sleep-over. And laundering that plastic suit. Really, sometimes all I can do is shove a roast in the oven and I don’t have half the things to do that Hannibal does WTHOUT HELP!!!! My advice to him is get a cleaning lady. OK, he may have a few things in the basement to hide – don’t we all. But you are who you are and as they say, no man is a hero to his valet. Hannibal, get help.

As I contemplate this episode's food styling duties, I wonder if it’s a people roast in the cannibal’s oven. Bryan Fuller, font of all that is Hannibal, emails to say he’d like it to be a nice roast beef. Hmmmm. Beef. This tells me that Hannibal is being very very careful. He knows people are beginning to talk so he should lay off the people-snacks for a while. I will make the most ostentatiously obviously-not-people  beef ever roasted. Like a billboard in the oven that says “Move along…no people-eating to see here folks.”

I imagine a full rib rack of beef on long bones. Frenched like a rack of lamb. My regular butcher doesn’t have the cut I want so I have to go to his competition. The new butcher is shocked at my request. I have to re-explain the whole ‘It’s for Hannibal” thing. I say, OK, like those dinosaur rib steaks you have – like that only the whole rib roast and don’t cut them into steaks. How many ribs asks the butcher, unsure of my sanity. Nine, I say, no, ten. Or twelve. What’s the maximum you can give me? (cows have 13 pairs) Nine, he says, getting used to the idea and starting to loosen up. Anything else is illegal because it would be from a deformed cow, he jokes. When it’s ready, John, my assistant, goes to get it and when he lugs it back to the studio, we gather around in awe of the sheer size of this giant thing of flesh. 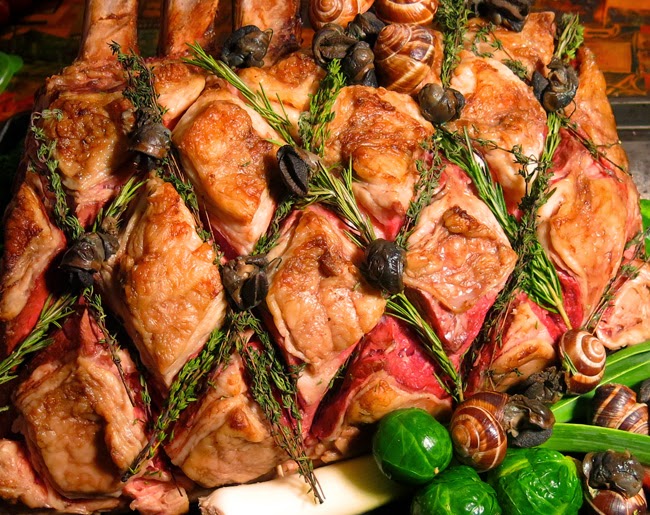 OK it’s big. But big is not enough. It has to be Hannibalized. I think about Chris Hardagon, our wonderful wardrobe designer and I realize -- nothing says Hannibal more than a plaid suit! I can definitely make a plaid pattern on this sizable canvas of beef! 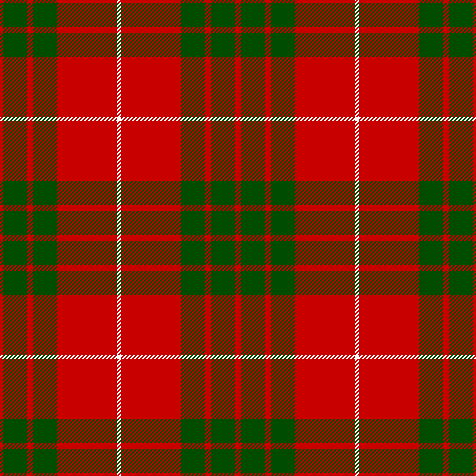 I score it in a diamond pattern like an Easter ham and lace the tracings with rosemary and thyme making a nice Crawford Tartan plaid. Bias-cut to be more slimming.  Reminds me of my days as a couturier draping massive ballgowns on oversized Mothers of the Bride.

Enough of the beefing. Except to say I had to cut it down by one rib – it wouldn’t fit in the oven. That’s a big roast.

When we go to shoot the scene, the director says, “Isn’t that roast kind of big for one person?” One person? Hannibal is not one person. He is a surgeon, an artist, a psychiatrist, a flower-arranger, a gourmet cook, an oenophile, a brew-meister, a boy who lost his sister, a man who can’t stop killing, and a god. And he gets hungry.

Now you may be shaking your head and saying, I don’t remember seeing a big roast in this episode. Three little words: Cutting. Room. Floor. It didn’t makethe final edit.

So here is the only place you will see my plaid roast. So I’m also posting other meals not ready for broadcast but ready for you to share in the Hannibal joy.

More of your photos of the Hannimeals you've been making

Aleks and Maria made a special dinner for friends to celebrate Hannibal’s Season 2 premier: Mushroom Cappuccino to start and delicious looking Not Meat Pie. Followed by Strawberry-Apple soup and a bit of drinking.

Alex S says “I gave Hannibal's non-people silkie chicken soup a whirl last spring! I managed not to mess it up despite being a novice cook and it gave me the opportunity to check out the many Asian supermarkets near my home.”

Katie and Aaron wrote: We'd been planning to do a dinner plus Hannibal night for a few weeks and finally pulled it off last night, to great success. 2 pix of Osso Buco

Jens wrote: Tried my hand at a variation of the tandoori liver. added fava beans (because liver and fava beans)and substituting risotto for couscous while adding honey for some sweetness to the match the liver and spices.

Hannichefs, thank you for sharing!

Next week: Will and Jack plan to go fishing but Hannibal has bigger fish to fry: Truite au Bleue.

. Except where noted, all content copyright Janice Poon 2014
Posted by Janice Poon at 20:11